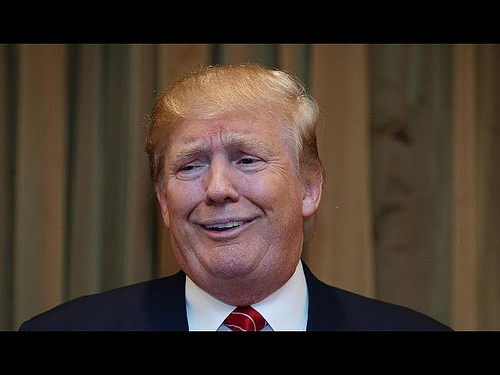 Gearing up for another Democratic primary season, journalists have already settled into the "gaffe" newsbeat, posting extensive updates on verbal miscues and how they could supposedly doom certain candidates. Specifically, the media narrative is that Joe Biden's gaffes will hurt him if he is the nominee against Donald Trump in the general election. Quick question, though: How many news articles and television reports have you seen and heard in the last year about Trump "gaffes" and how they may stand in the way of his re-election bid? Probably the same number as I have, which is basically zero. Keep in mind that just days ago, while reading off a teleprompter inside the White House, Trump misidentified the Ohio city that had just suffered a deadly gun rampage. But days of "gaffe" coverage? Not for him.

The entire gaffe enterprise has always been rather dubious, since it usually focuses more on the theater of it than it does on policy substance. Also, reporters have traditionally trained their gaffe patrols much more intently on Democratic candidates than they have on Republicans. (See also: optics.)

But today, the media's gaffe obsession really seems out of whack, given that it's unfolding against the backdrop of the presidency of Donald Trump, whose entire political career can accurately be described as a verbal gaffe. Famous for being a habitual liar, as well as boasting garbled and often impossible-to-follow syntax that leaves people scratching their heads trying to make sense of his pronouncements, Trump has obliterated the idea that an occasional gaffe ought to define a politician, or that it will doom his or her popularity.

And that was true back in 2016. As HuffPost's Jason Linkins wrote at the time, Trump's "hallucinatory presence and constant stream of cuckoo-bananas balderdash have essentially made the gaffe entirely irrelevant." Trump "doesn't have momentary lapses. He is a constant, walking lapse of good sense, taste and judgment."

That's even more true today. During one rambling, incoherent address this week in Pennsylvania, Trump said he won the county where he was speaking by 28 points (it was 18); lamented that roads aren't straight because of environmental regulations; bragged about being responsible for the construction of an energy plant that was begun under President Barack Obama; falsely claimed that the U.S. is the only country that exports wheat to Japan; claimed he's losing billions in personal wealth by serving as president; suggested China doesn't "have oil and gas"; misstated the time of his speech by three hours; and claimed credit for passing Veterans Choice legislation that was passed and signed into law under Obama.

Related Topic(s): Gaffes; Joe Biden; Media; Media Bias; Trump, Add Tags
Add to My Group(s)
Go To Commenting
The views expressed herein are the sole responsibility of the author and do not necessarily reflect those of this website or its editors.