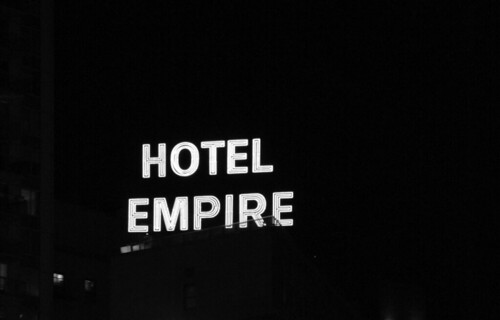 No one whose priority is to overthrow the capitalist state should vote for Joe Biden. Whether the alternative they select is to abstain from voting or to vote third party is their choice (I'm personally voting for the Marxist candidate Gloria La Riva), but to vote for Biden is to go against the goal of proletarian revolution. This is not just because voting for the imperialist Democratic Party strengthens the state, or because it drags one into the cycle of petty bourgeois reformism, but because it perpetuates the dangerous illusion which Biden's political camp is trying to keep the masses tethered to.

This camp, made up of anti-Trump neocons, corporate media pundits, and the liberal oligarchs who own the DNC, wants people to think and act like the capitalist world is as stable as it was several decades ago. This is evident from the very tone of Biden's campaign ads, which put forth the same platitudes that were standard for politicians in the 80s and 90s while sidestepping the substance of the Democratic Party's policies. It's also evident from Biden's embrace of the standard neoliberal and imperialist orthodoxies, with his most disruptive policy proposal being to raise the minimum wage to $15 an hour.

Such a wage hike, along with the partial social safety net expansions that Biden would likely implement, aren't even the absolute bare minimum of what a government should be doing to improve its people's living standards during this time. The vast majority of the policy proposals from the social democrats, from Medicare for all to a green new deal, are not supported by Biden and the party leadership. This means inequality in the U.S. would continue to rise under a Biden presidency, with America's working class being relatively well off compared to the parts of the global population that don't live in the imperial core.

Whatever retreats of foreign imperialist operations that Biden might carry out, such as ending the war on Yemen or reducing U.S. troops in southwest Asia, wouldn't reverse the deadly process that global capitalism and empire are tied in with during the 21st century. This is a process where the billionaires within the core imperialist countries continue to grow wealthier through kleptocratic profiteering, while the poor and colonized populations fall into more widespread poverty and become more vulnerable to climate-related disasters.

Higher wages in the imperial core and a partial softening of imperialist slaughter won't end the growing privation of the Palestinians, or save the victims of Latin American austerity, or stop poverty in Africa from continuing to increase amid climate collapse. Biden's mission of regime change in Venezuela shows a commitment towards worsening Washington's economic and terroristic warfare against the country's people, and ultimately towards expanding the Third World's paradigm of neoliberal misery.

Biden's policies also wouldn't stop the shift towards fascism within the U.S., or the suffering of marginalized groups that go along with this. Kamala Harris, who's had a career of unjustly imprisoned people from vulnerable demographics, would bring an expansion of the police and carceral state-one which is rationalized by the desire among the agents of capital to crack down on America's growing unrest. Biden would continue the expansion of the surveillance state and the war on whistleblowers, along with the push towards tightened online censorship against socialist and anti-imperialist media. In Biden's words, nothing will fundamentally change in the next four years, meaning the state terrorism and disproportionate pandemic deaths which the country's colonized peoples have been experiencing will be ongoing.

Just like Obama did, Biden would overall make the forces of repression, imperialist violence abroad, and corporate plunder even more severe. This is what the interests of capital call for in these times where environmental collapse, economic deterioration, and global health crises are making the plutocracy buckle down in order to keep profits up. Yet Biden's camp is determined to pretend like we're back in the 90s, when the blowback from empire still had yet to reach most of American society.

The country's transition into fascism is inevitable, as is the rest of the capitalist world's descent into extreme inequality and genocidal climate catastrophe. This will hold true until a new wave of socialist revolutions come to liberate more nations from the grips of capitalism, colonialism, and imperialism. The narrative that voting for Biden can forestall or reverse this process depends on the assumption that the Democratic Party would follow an anti-fascist line if it comes to power, which is a false hope. The party's platform doesn't even include a moratorium on immigrant deportations, a policy which Biden promised during the primary with evidently dubious honesty.

The leftist and communist figures who still advocate for voting for Biden would say that while the descent into fascism can't be avoided through a Biden presidency, doing so is still "harm reduction." But as Indigenous Action wrote this year, attempting to carry out "harm reduction" through this route does more harm than good:

We don't dismiss the reality that, on the scale of U.S. settler colonial violence, even the slightest degree of harm can mean life or death for those most vulnerable. What we assert here is that the entire notion of "voting as harm reduction" obscures and perpetuates settler-colonial violence, there is nothing "less harmful" about it, and there are more effective ways to intervene in its violences. At some point the left in the so-called U.S. realized that convincing people to rally behind a "lesser evil" was a losing strategy. The term "harm reduction" was appropriated to reframe efforts to justify their participation and coerce others to engage in the theater of what is called "democracy" in the U.S.

This coercion towards voting for the Democratic Party serves to strengthen the state, which especially in this time does quite a lot of harm. Those who seek to liberate this continent from oppression can't afford to help the state in this way, nor to further any of the liberal narratives about how Biden would be an effective opponent of fascism. Biden's backers in the media, the intelligence establishment, and corporate America want him to win out of the hope that he'll instill this illusion of safety within the masses. That he'll make the empire relatively stable again, and get people to turn their backs to all the horrors which the U.S. will continue to facilitate in the coming years.

Related Topic(s): Capitalism; Censorship; Colonialism; Imperialism; Police; Poverty; Repression; Surveillance, Add Tags
Add to My Group(s)
Go To Commenting
The views expressed herein are the sole responsibility of the author and do not necessarily reflect those of this website or its editors.