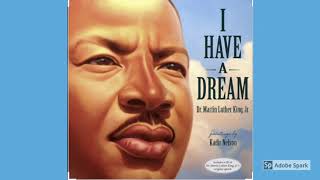 Today, as a nation, we honor the legacy of Dr. Martin Luther King, Jr.

We honor his struggles and his triumphs, his courage and his conviction. We honor the life he devoted to taking a stand against racial and economic injustice, and how by doing so, he forever changed the course of history.

Dr. King was the heart and hope of the civil rights movement. His dream shocked the conscience of our nation and challenged us to live up to our highest ideals.

As I've traveled the country on this campaign, I have seen first-hand the dream that Dr. King imagined so many years ago. I've talked with Americans of all ages and backgrounds, from red and blue and purple states. I've met with parents in big cities and young people in small towns. And while I've heard plenty about what's gone wrong in this country, what I hear about most is hope that we can build something better.

That hope for a better America is Dr. King's legacy, and today we are soldiers in the fight for social, racial and economic justice.

And make no mistake about it we are in a fight.

We're in a fight against Donald Trump and his Republican Party's politics of division.

A fight to clean up corruption in Washington and create an economy and a government that works for all of us.

A fight to tear down the legacy of systemic racism and discrimination and give everyone a voice in our democracy.

These fights are all of our fights. And I'm running for president because I believe the only way we can reach a better America is by fighting together.

As we honor Dr. King today, may we all remember that we are the heirs of his legacy. This moment in history comes to us, and we cannot pass it along to someone else. We must act. We, too, must fight back.

That's what Dr. King called on us to do. That's what the urgency of this moment requires us to do. And that is the way we will make Dr. King's dream a reality for us all.

I know this is an uphill battle, but I believe we're called to this fight. And I believe that if we work together, fight together, and, yes, persist together we can overcome.

Related Topic(s): Martin Luther King Jr; Racism; Rights, Add Tags
Add to My Group(s)
Go To Commenting
The views expressed herein are the sole responsibility of the author and do not necessarily reflect those of this website or its editors.