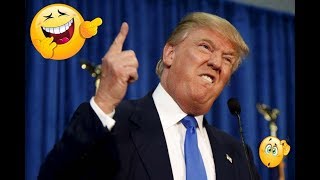 Crazy Donald John Trump is the 45th and current President of the United States
(Image by YouTube, Channel: All You Want)   Details   DMCA

When folks offer thanks on Thanksgiving, the left ought to give at least a murmur of thanks to the turkey in chief. In many ways, the Trump presidency, as hateful and unpleasant and regrettable as it has been, has created great openings.

The left is getting to advance ideas and programs that would have been unthinkable if Hillary Clinton had won, and brought in Neoliberalism 3.0. Donald Trump really is the disrupter-in-chief, and we can only imagine how stultifying life would be for the progressive wing of the Democratic Party were Hillary and Bill back at 1600, and doing everything for 2020.

Instead, today we find ourselves living in that rarest of things, a radical age. The center does not hold, plainly. And many things we used to say are structural, meaning that they couldn't be addressed, are open for debate. Many people are expressing an enormous sense of distress over fundamental questions. And the left is being taken seriously, for once, as providers of potential solutions to those problems.

Begin in the most obvious place. Would the wave of sexual harassment firings and resignations of powerful men be taking place today if Hillary Clinton had won? I think not. This wave is happening because just when women in this country were poised to accept a belated advance, a woman finally occupying the White House, the welcome mat was swept away and a misogynist and professed groper was given the job.

I remember thinking last October that some great shift in the power relations of men and women in our country was about to take place with the swearing-in of Hillary Clinton and all the symbolic and non-symbolic effects that would have. Many people felt that excitement. The rage that followed her defeat, and the sodden awareness that well over half the electorate wanted her to be president, by several millions, are the most important factors leading to the #Metoo rebellion. The inequities and violations that these women are opening up about occurred years ago, often decades. Something tripped it. The elevation of the groper in chief.

And look what the result has been: nothing less than a forest fire raging through the patriarchy. Many huge trees are crashing down. Women are imagining a more equitable distribution of privileged positions.

While no one can say that Hillary Clinton wouldn't have detonated this change, I have the sense that Harvey Weinstein (a Clinton donor) and others might have retained power and status under Clinton that they lost under Trump, the perception of power that stopped women from going forward.

Tarana Burke is the founder of the #MeToo movement, and when she spoke recently on the PBS News Hour she said the problem of harassment is rooted in capitalism. Whether or not you agree with her, it is remarkable that this argument is being advanced in a mainstream setting. At a recent conference I attended in Minneapoli s, more than one speaker said that capitalism had to be taken out by the roots. You might say that these are radical fulminations, but how many people in our society have faith in capitalism today? What percentage of our society are winners under that system, let alone in the world? A minority, to be sure; maybe as high as 30 or 40 percent. One of the gifts of the Sanders campaign was making socialism a legitimate topic for debate; and I believe that discussion will continue, with demands on progressive Democratic politicians that they stand for real change on income distribution.

I could go on to issues of bigotry, incarceration, the opioid addiction epidemic, immigration, and police violence. No doubt the NFL hierarchy, backed by Donald Trump, managed to shut down the football players' radical actions, but the left is gathered in solidarity on these questions as never before. No Democratic Party politician will be able to run without making these themes central. Since the Women's March and before, all of us have seen liberal friends radicalized by Trump's ascent. We've seen privileged people expressing the belief that the skill-set of the Democratic center is not capable enough to deal with Trumpism. Those beliefs are stronger among the young.

Readers are sure to object that Trump has done a lot of damage. Unquestionably that is true. He licensed Charlottesville. He has made our discourse coarse and offensive. He is reversing gains on climate change and foreign policy and threatening nuclear war.

I didn't vote for Trump, I didn't want him in the White House; I want this presidency to end in a hurry; the conservative in me seeks a return to civility. But I would point out that an overwhelming majority of the country and the elites agree with me. They hate Trump, and want him gone. And not being able to banish him, they set out to sequester him from the start. It was clear in the Super Bowl ads, when one big company after another showed how offensive they found his immigration policy. It is clear in the determination by the New York Times and Washington Post to do all in their power to bring Trump down. It is clear in all the cultural forces that are seeking to hem in Trump's powers, and that have largely done so.

The deep state is also working against Trump. The purport of the news from the Mueller investigation and of the recent testimony of military commanders about Trump's proximity to the nuclear football is that the board members of the security state are as panicked by Trump as the rest of us. Their careers have been devoted to keeping lunatics out of the engine room. They are going to try to take Trump out by legal means; and one day we will learn the story about everything they did to keep him away from the football.

The successful sequestration of Donald Trump shows the limits of presidential power, and the importance of other political expressions than the highest and most official ones.

Trump rose because he recognized the force of marginalized reactionary voices. Indeed, to return to my theme, the American stage is today peopled with speakers once thought to be off limits, or extreme. And there is a benefit to the left in that. There are deep divisions in the country over the future, the old center is shattered.

Many issues are up for grabs, and the left is going to have a lot to say. Trump is more symptom than cause of that unrest. But the disrupter in chief has reanimated the left.

Philip Weiss is a longtime writer and journalist in New York. He co-edits a website on Israel/Palestine, Mondoweiss.net, which he founded in order to foster the movement for greater fairness and justice for Palestinians in American foreign policy. He is currently working on a novel about the US in Australia during WW2.
Related Topic(s): Capitalism; Donald Trump Narcissist; Military; Trump Moron; Women, Add Tags
Add to My Group(s)
Go To Commenting
The views expressed herein are the sole responsibility of the author and do not necessarily reflect those of this website or its editors.