Pledging to "end endless wars," Pete Buttigieg claims he has "never been part of the Washington establishment." But years before he was known as Mayor Pete, an influential DC network of military interventionists placed him on an inside track to power. 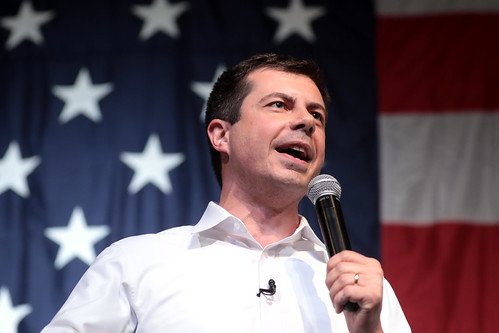 In his quest for front-runner status in the 2020 presidential campaign, Pete Buttigieg has crafted an image for himself as a maverick running against a broken establishment.

On the trail, he has invoked his distinction as the openly gay mayor of a de-industrialized Rust Belt town, as well as his experience as a Naval reserve intelligence officer who now claims to oppose "endless wars." He insists that "there's energy for an outsider like me," promoting himself as "an unconventional candidate."

When former Secretary of State John Kerry endorsed Joe Biden this December, Buttigieg went full maverick. "I have never been part of the Washington establishment," he proclaimed, "and I recognize that there are relationships among senators who have been together on Capitol Hill as long as I've been alive and that is what it is."

But a testy exchange between the South Bend mayor and Rep. Tulsi Gabbard during a November 20 Democratic primary debate had already complicated Buttigieg's branding campaign.

Like Buttigieg, Gabbard was a military veteran of the 9/11 generation. But she had taken an entirely different set of lessons from her grueling stint in Iraq than "Mayor Pete." Her campaign had become an anti-war crusade, with opposition to destructive regime change wars serving as her leitmotif.

After ticking off her foreign policy credentials, Gabbard turned to Buttigieg and lit into him for stating his willingness to send US troops to Mexico to crack down on drug cartels.

A visibly angry Buttigieg responded by accusing Gabbard of distorting his record, then quickly deflected to Syria, where he has argued for an indefinite deployment of occupying US troops.

Rehashing well-worn criticism of Gabbard for meeting with Syrian President Bashar al-Assad during a diplomatic visit she took, her trip was devoted to de-escalating the US-backed proxy war that had ravaged the country's population Buttigieg attacked the congresswoman for engaging with a "murderous dictator."

Related Topic(s): Harvard; Linkedin; National Security; Nationalist Politics; Neoconservatives; Pete And Chasten Buttigieg; Pete Buttigieg; USAID, Add Tags
Add to My Group(s)
Go To Commenting
The views expressed herein are the sole responsibility of the author and do not necessarily reflect those of this website or its editors.