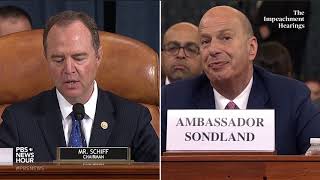 Wednesday's public hearing on the impeachment of President Trump featured the US ambassador to the European Union, Gordon Sondland, who testified that, contrary to the White House narrative, there had been a "quid pro quo" in Trump's dealings with Ukraine.

Trump, Sondland said, offered military aid and an invitation to Ukrainian President Volodymyr Zelensky to visit the White House in return for an announcement by Zelensky of an investigation into the activities of the Democratic National Committee in Ukraine in 2016 and the role of Hunter Biden. Biden was paid $50,000 a month by a large Ukrainian gas company while his father, then the vice president, was point man for Ukrainian policy in the Obama administration.

Sondland's appearance was trumpeted by the Democrats on the House Intelligence Committee and most of the media as a "smoking gun" against Trump. Sondland was even compared to John Dean, the White House counsel whose testimony against Richard Nixon in the Watergate scandal paved the way to Nixon's resignation to avoid certain impeachment.

The testimony of John Dean, however, was part of the uncovering of a major attack on the democratic rights of the American people. The break-in at the Democratic National Committee offices in the Watergate complex, carried out by ex-CIA agents working for Nixon, was the outcome of a protracted campaign of political spying and repression directed against Vietnam War protesters, the former military official Daniel Ellsberg, who leaked the Pentagon Papers, and other political opponents.

There are no such issues of democratic rights in the conflict between Trump and the Democrats, who are acting as the political front men for the CIA and other sections of the national security apparatus. The significance of Sondland's testimony lies not in what he revealed about Trump, but in his account of the everyday relationship between American imperialism and Ukraine, a small, dependent nation that has been turned into a vassal state by successive administrations in Washington.

The president of Ukraine is told by American diplomats exactly what words he must use and what promises he must make to appease his overlord in Washington. When President Zelensky offers to have his chief prosecutor make a statement along the lines demanded by Trump, he is told that he himself must make the statement, and it must be televised so that he is on the record. He is told to jump, and exactly how high.

In that respect, there is no difference whatsoever between Trump's conduct in 2019 and the actions of his Democratic nemesis, Vice President Biden, in 2016. Biden traveled to Ukraine and told its government that Washington was withholding $1 billion in promised aid until certain actions were taken, including the firing of a corrupt national prosecutor. Biden even boasted in a US television interview that within six hours of his delivering that ultimatum the Ukrainian president had sacked the official.

Apologists for the Democrats and Biden will insist that Biden was carrying out official US government policy, in the interests of US "national security," whereas Trump was looking out for his personal interests, seeking dirt on a potential election rival. This argument is questionable even on its own terms, since the prosecutor whose firing Biden demanded had control over the corruption investigation into the gas company Burisma, which was lavishly paying Biden's son.

But there is a more fundamental issue: What was the "national security" interest that Biden was upholding? Why is the United States supplying vast quantities of military aid and weaponry to Ukraine? It is part of the effort by American imperialism, carried out over two decades, to turn Ukraine into an American puppet state directed against Russia.

For all the claims by the Democrats that they are shocked by Trump seeking "foreign interference" in the 2020 presidential election, every presidential election in Ukraine since 2004 has been characterized by massive foreign interference, particularly by the United States. One US official boasted in 2013 that Washington had expended more than $5 billion on its operations to install a pliable anti-Russian regime in Kiev.

Detaching Ukraine from Russia has been a key US foreign policy objective since the dissolution of the Soviet Union in 1991. Ukraine and Russia were the two largest components of the USSR. They share a land border of more than 2,000 kilometers and economies that were once closely integrated. Thirty percent of the Ukrainian people speak Russian as their first language, including the vast majority of the population of Crimea and the eastern Ukrainian region now controlled by pro-Russian forces.

In both World War I and World War II, German imperialism made the seizure of Ukraine, with its rich soil and proximity to the oilfields of the Caucasus, a key strategic objective. The largest number of Soviet Jews massacred as part of the Holocaust were killed in Ukraine, in atrocities such as Babi Yar, the ravine outside Kiev where 34,000 Jews were machine-gunned, and Odessa, where 50,000 Jews were slaughtered.

American imperialism is seeking to do what German imperialism failed twice to accomplish: use Ukraine as a launching pad for political subversion and military violence against Russia. Behind the backs of the American people, with little or no public discussion, the US government has been shipping large quantities of arms and other war materiel to Ukraine, in an operation that brings with it the increasing danger of a direct US military collision with Russia, a conflict between the two powers that between them deploy most of the world's nuclear weapons.

The impeachment hearings have focused on anti-Trump witnesses who are themselves key participants in this reactionary foreign policy, and who speak in the Orwellian language of American imperialism. They define "democracy" in Ukraine in terms of the degree to which Ukraine's government agrees to serve as an instrument of American foreign policy. They hail the so-called "Revolution of Dignity" in which an elected president, Viktor Yanukovych, was overthrown because he was viewed as an obstacle to the anti-Russia campaign. They salute fascistic figures like Ukrainian Interior Minister Arsen Avakov, sponsor of the notorious Azov Battalion, which marches under modified swastikas and celebrates the Ukrainians who collaborated with the Nazis in World War II.

Patrick Martin writes for the World Socialist Website (wsws.org), a forum for socialist ideas & analysis & published by the International Committee of the Fourth International (ICFI).
Related Topic(s): American Facism; American Imperialism; American_Apartheid; Crisis; Impeachment Hearing, Add Tags
Add to My Group(s)
Go To Commenting
The views expressed herein are the sole responsibility of the author and do not necessarily reflect those of this website or its editors.