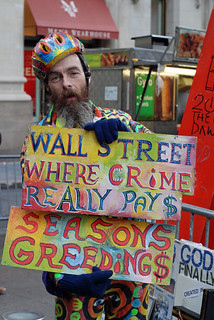 Wall Street: Where Crime Really Pays
(Image by World Can't Wait)   Details   DMCA
The May 27 headline in the Daily Beast captured the special moment: "SHOCKING ARRESTS AS TEAM AMERICA SMASHES 'CORRUPT' FIFA SOCCER." It made me think of a headline we never got to see: "SHOCKING ARRESTS AS U.S. DEPARTMENT OF JUSTICE SMASHES 'CORRUPT' WALL STREET MEGABANKS."

Newly appointed U.S. Attorney General Loretta Lynch flexed her legal muscles at the May 27 press conference, announcing that "The [FIFA] indictment alleges corruption that is rampant, systemic, and deep-rooted both abroad and here in the United States. Today's action makes clear that this Department of Justice intends to end any such corrupt practices, to root out misconduct, and to bring wrongdoers to justice."

Yet this is the same Department of Justice that has indicted only one lower-level executive for the "rampant, systemic, and deep-rooted" megabank corruption that nearly destroyed the world's financial system in 2007-08. The corrupt practices included accounting fraud, securities fraud (including creating investment vehicles designed to fail) and bribery of government officials.

This criminal behavior caused a deep recession which cost the American economy upwards of $13 trillion in lost output. The human cost of recession-related effects such as protracted unemployment, job insecurity, lost household wealth and educational opportunities was massive but hard to calculate in dollars. Compared to the financial crisis, the economic and social cost of FIFA's misdeeds is trivial.

Yes, the largest banks have had to pay record amounts in fines for their role in the financial crisis--more than $180 billion by the end of 2014. Lately, they have even been required to plead guilty to criminal charges instead of paying only civil court settlements. But these guilty pleas are made by corporations. No high-ranking executive has yet been indicted.

This contrasts sharply with the response of the Reagan and Bush (Sr.) administrations to the fraudulent activity that led to the Savings and Loan bank crisis in the 1980s. In the late 1980s and early 1990s there were over 1000 criminal prosecutions of bankers at all levels, resulting in 839 convictions. 1,043 out of 3,234 savings and loan associations failed.

Today, however, American authorities don't want to punish criminal megabanks so severely that they will fail. These banks are "too big to fail"--as the demise of Lehman Brothers demonstrated in 2008, the collapse of any one of them could bring on another financial crisis. Yet Obama and Congress have failed to break up these monsters into smaller entities. Instead, they've been allowed to reap huge profits even after paying multibillion-dollar fines.

JPMorgan Chase (the world's largest bank) and its chairman/CEO Jamie Dimon illustrate how paying massive fines for criminal acts is now a routine business expense for Wall Street. According to Dividend.com, "JP Morgan was fined $35,241,500,000 in a three-and-a-half year period [ending in November of 2014]. Nearly all of the penalties were tied to the financial crisis and the company's promotion and use of mortgage-backed securities." Yet JPMorgan Chase's profits from 2011 to 2014 added up to $80 billion .

President Obama is one of Dimon's greatest fans. In May of 2012 Obama had this to say on ABC's The View: "JPMorgan is one of the best-managed banks there is. Jamie Dimon, the head of it, is one of the smartest bankers we got."

As if to flag his cozy relationship with Wall Street, President Obama teamed up with his favorite banker last December to hand a major legislative victory to the big banks. Thanks to personal lobbying by Obama and Dimon, the House of Representatives narrowly passed a $1.1 trillion spending bill which most House Democrats voted against.

House Minority Leader Nancy Pelosi and Rep. Maxine Waters, ranking member of the House Financial Services Committee, led the opposition in the House with the support of Sen. Elizabeth Warren. They voted against the bill because it contained an amendment crafted by bank lobbyists to weaken a key provision of the Dodd-Frank Act of 2010. The amendment targeted "restrictions on banks that want to trade in the same sorts of risky derivatives that sparked the financial meltdown of 2008, and allows the banks to back their bets with taxpayer-backed insurance" ( HUFFPOST 12/13/14 ).

To sweeten the pot, another amendment rewarded the political parties for their good behavior by allowing wealthy donors to donate eight times more to political parties than in the 2014 election cycle (Philip Elliott, AP 12/10/14 ). Members of Congress know that Wall Street royalty are generous. According to Americans for Financial Reform , "Individuals and entities associated with the financial sector reported making $433,515,888 in contributions to federal candidates for office during the 2013-14 election cycle."

That Attorney General Loretta Lynch could keep a straight face while vowing on camera to put an end to "rampant, systemic, and deep-rooted corruption" here and abroad shows how such corruption is the new normal in Washington. President Obama should be impeached for his failure to uphold our laws. But who would do the impeaching?

Related Topic(s): Bankers; Bankers; Banks; Congress; Corruption; Corruption; Economic; Financial; Fraud; Fraud; (more...) Hypocrisy; Indictments; Laws; Misconduct; Obama; President; Prosecution, Add Tags  (less...)
Add to My Group(s)
Go To Commenting
The views expressed herein are the sole responsibility of the author and do not necessarily reflect those of this website or its editors.