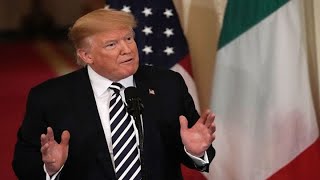 Hardly a day goes by some "incident" involving Iran gets the US, now lately the British, up in arms warning the Iranian's its actions will not be tolerated.

The latest has the Iranian's intercepting two British flagged oil tankers in the Strait of Hormuz detaining one while inspecting it then releasing it hours later allowing it go onto its destination. However the other tanker was said by Iran to have damaged an Iranian fishing boat and brought to Iran for a further investigation.

The British are calling it a retaliation for their marines seizing an Iranian oil tanker off the Strait of Gibraltar some two weeks ago with the dubious claim it was headed to Syria in violation of EU sanctions. The Iranian's called it an "act of piracy" and saw it as the Brits doing the US bidding.

Other incidents have occurred with US claiming it shot down an Iranian drone that supposedly came too close to one of its Naval ships in the Persian Gulf with Iran countering none of its drones were lost, even saying the US Navy shot down one of its own drones.

Let's recall the Iranian's did shoot down a US spy drone it says violated its air space. That was the incident where Trump was going to retaliate but at the last minute called off the strike.

But let's get to the heart of the matter.

Ever since last year when Trump withdrew the US from the 2015 nuclear deal President Obama signed with Iran along with Britain, France, China, Russia and Germany and reinstated unilateral sanctions on Iran, there's been an ongoing crisis with Iran perpetrated by the US withdrawal.

Iran was in full compliance with the international agreement which all the other signees concurred. They wanted the deal to continue even without the US. The problem is the US has threatened secondary sanctions against the EU countries if they continue trade with Iran, particularly oil which the US has vowed Iran be completely shut off from trading any of its oil.

It isn't much of a stretch to imagine the US intending to provoke Iran into committing some act that justifies a US retaliation.

Iran does have its red lines. Any attack on its territory or its air space it will defend itself. That was made clear when it shot down the US spy drone that violated its air space.

It's not that Iran isn't willing to talk. It simply wants the US return to the nuclear deal it signed and all US sanctions against Iran be ended.

Trump says he doesn't want war with Iran. But he painted himself in a corner by unilaterally withdrawing from the nuclear deal believing he alone would force Iran to renegotiate a new deal.

Iran also doesn't want war with the US but isn't willing to bend to US pressure.

Retired. The author of "DECEIT AND EXCESS IN AMERICA, HOW THE MONEYED INTERESTS HAVE STOLEN AMERICA AND HOW WE CAN GET IT BACK", Authorhouse, 2009
Related Topic(s): Iran; Iran Nuclear Deal; Sanctions; Trump, Add Tags
Add to My Group(s)
Go To Commenting
The views expressed herein are the sole responsibility of the author and do not necessarily reflect those of this website or its editors.