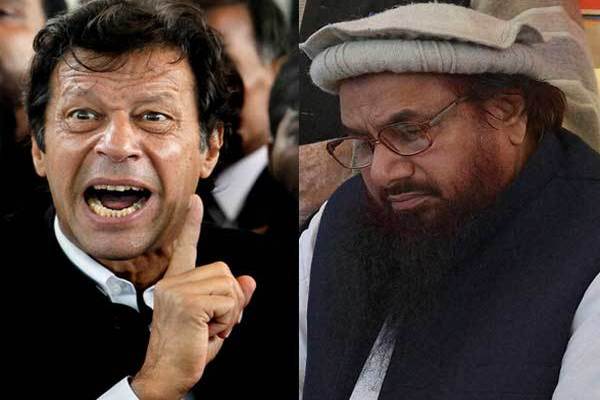 His swooning and gushing crowd in India would go berserk now that Pakistan's Prime Minister Imran Khan has acknowledged his country has terror groups and that the "Naya Pakistan" wouldn't allow them to function with impunity on its soil. They wouldn't bother to seek "proof and evidence" of this resolve unlike Balakot.

The Lutyens Media is on its own trip, refusing to acknowledge what Imran has himself conceded that Pakistan has terror group on its soil. Instead, the Lutyens Media Times of India, Indian Express, The Hindu and Hindustan Times have all based headlines on Pakistan's fear of India attacking them before 2019 polls.

This swooning crowd is wrong on both counts--India never initiates a war and is always reactive to threats. Second, Imran Khan is unlikely to follow on his promise. But then why Pakistan has acknowledged that it has terrorists on its breakfast table?

That's because Pakistan has seen the limitations of being a client-state to China. That's because it knows it cannot do without International Monetary Fund (IMF) which is controlled by United States (nearly 18 percent share). If it doesn't fall in line with Trump's distaste for their terrorism, Pakistan could simply blow up.

Before we illustrate that Imran Khan is unlikely to follow up his resolve on terrorism-on-its-soil, let's look at its askance with China and IMF both.

Despite China pulling all stops to flow financial assistance, Pakistan needs at least $12-billion bailout from the IMF to remain on its feet. As it is, China's 22 infrastructure projects in Pakistan under China Pakistan Economic Corridor (CPEC) are worth $28.6 billion and Pakistan would have to pay back close to $100 billion to China by 2024, presently completely beyond its capacity.

Imran Khan has begun pushing back against this "client status" of China. It has downsized the main Chinese railway project by $2 billion, removed a $14 billion dam from Chinese financing and scrapped a 1320-megawatt coal-based power plant in the pipeline. The predatory swoop of China is hurting Pakistan: For instance, China would receive tax-free 91 per cent of revenues from the Gwadar port until it returns it to Pakistan in four decades. Equipment imports from China are rising and the foreign-exchange reserves of Pakistan are consequently seriously depleted and the balance-of-payment crisis is acutely real.

Meanwhile IMF, as said controlled by United States, wants "complete transparency" from Pakistan before it loosens its purse strings. Chillingly, IMF has stated that it needs transparent disclosures to determine whether Pakistan has debt sustainability. This means that Pakistan would have to come out clean on the extent, composition and terms of Pakistan's debts to China. US, on its part, doesn't see Pakistan fit to get IMF bailout. The US secretary of state Mike Pompeo has said there would be "no rationale" for an IMF bailout of Pakistan that pays off Chinese debts.

That makes it clear that Pakistan would've to hedge its bets. It can't leave the umbrella of China, which shields it from international furore, on terrorists and sells it weapons that China's own military has not inducted, including prototype nuclear power reactors. It also can't leave out IMF just to live another day, so to say.

The Immy (Imran)-loving elites in India are completely oblivious to the fact that China and Pakistan together are in a blood-pact to contain, if not destroy, India.

China is salami-slicing India in the Himalayan belt and Pakistan is inflicting thousand cuts in Jammu and Kashmir through its terror networks, many of whom have been blacklisted by the UN itself. As much 55 percent of Jammu and Kashmir is in the hands of Pakistan (35%) and China (20%). China also has ambitions to build a land corridor to Pakistan so that Arabian Sea and Indian Oceans opens up to them directly.

It would be great news for India if IMF doesn't release another round of funds this would be IMF's 22nd bailout to Pakistan in six decades unless Pakistan shows some real action on ground against terrorists. Pakistan's financial viability alone shouldn't be criteria to supply the oxygen of funds.

There is no reason to believe that Imran Khan can walk the talk. The terrorist network and Pakistan's army, which keeps Imran Khan in office, are Siamese twins. It's simply time-buying tactics till Pakistan secures IMF loan.

So readers, don't you believe a line in what you read in our partisan Lutyens Media. India is not an aggressor and would never be. It's just to demonize Narendra Modi and the BJP/NDA government. Terrorism is Pakistan and Pakistan is terrorism.

Meanwhile, we await Navjot Singh Sidhu, Barkha Dutt and Shoba De to gush over how Imran Khan is "shanti ka messiah (Angle of Peace)" in cracking the whip on terrorists. Let's see if they also ask for its "proof or evidence."

Related Topic(s): Bailout; Client; Economic; Evidence; Infrastructure; Media, Add Tags
Add to My Group(s)
Go To Commenting
The views expressed herein are the sole responsibility of the author and do not necessarily reflect those of this website or its editors.