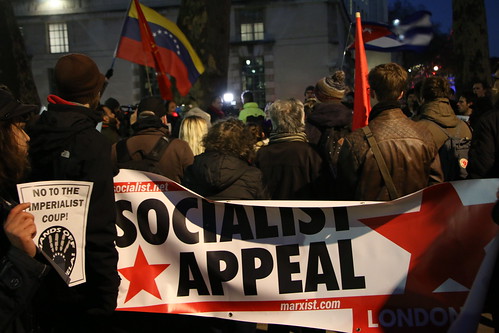 The Washington imperialists are acting so desperate to carry out regime change in Venezuela-having staged another failed coup attempt just last week-because the longer Chavismo stays in power, the more Latin America becomes at risk of slipping from U.S. control. Chavismo is such a threat because it's helping Latin America figure out an iteration of Marxism that works according to the conditions of the region; specifically, one that can fix the region's problems of being underdeveloped due to exploitation from the imperialist countries.

This doesn't mean that the ruling United Socialist Party of Venezuela itself is strictly Marxist, at least in terms of the ideological strains it allows. It means that despite the non-Marxist strains which partly drive the party's direction, the party is fostering a type of Marxism that can stop Latin American nations from remaining subject to the rules of dependency theory.

Dependency theory says that under globalized capitalism, a periphery of poor and underdeveloped (i.e overexploited) nations get their wealth siphoned off to the richer states. Because of this disparity, the exploited nations fall developmentally behind the core imperialist countries. With the rise of Bolivarianism and the other Latin American anti-imperialist movements, Venezuela and its regional neighbors are moving closer to overcoming the gap in development.

And as Argentinian economics professor Claudio Kats assessed in an interview last year, Marxism is relevant to this project:

Venezuela is defying the constraints observed by dependency theory through economically developing without the help of the imperialist countries. A core requirement for dependency theory to apply, according to economist Theotonio Dos Santos, is "a situation in which the economy of a certain group of countries is conditioned by the development and expansion of another economy, to which their own is subjected."

The U.S. is able to control Venezuela's economy by imposing embargos on it, but it's not able to determine the country's political and economic future to the extent that China can. It's also not able to extract wealth from Venezuela, at least not to the extent that the Venezuelan industry nationalizations of the last two decades have disempowered multinational corporations. The U.S. is also unable to politically commandeer Venezuela through IMF debt, as it's done with other countries. The main wealthy country that's been giving loans to Venezuela is China, which is not an imperialist power and certainly isn't siphoning away Venezuelan wealth in the process.

Kats agrees that China's increasing role in Venezuela and other countries represents another way Washington's hegemony is slipping: "Latin America lacks sovereignty because of US imperialism. Latin America is still North America's backyard""with Trump, more than ever""but the dispute between the United States and China over the region's resources has become central. The proprietary interests of US imperialism are being challenged by the continental presence and investment of the Chinese government." These factors-the movement by nations like Venezuela towards economic independence and the growing presence of China-are what will continue to reshape the geopolitical power balance in the region.

Another nation in the region that's significantly moving towards autonomy from imperial control is Argentina. Argentina is far from being socialist, but its human rights, feminist, and economic justice movements have gained a tremendous amount of leverage since the country's depression during the early 2000s. Last year, leftists prevailed in the general election, which has put the social movements in a better position to create changes amid the Covid-19 economic crisis.

Despite the harsh repression that's come from Argentina's capitalist government in order to enforce the quarantine rules, the demands of the Argentinian poor and working classes are coming far closer to realization than is the case in most other Latin American countries. Top Argentinian government officials have come to support a proposal for a tax on the wealthy that would raise around $3 billion.

The proposal won't pass without pushback, but this is a sign of how much of a threat it poses to imperialism; the right-wing factions that oppose it are working in the interests of the U.S., which has been trying to use debt entrapment instruments to shore up control over Argentina. This kind of wealth tax would make the country better able to independently support its economy.

Argentina is the Latin American country most likely to impose a wealth tax, but it's notable that numerous other countries in the region, from Colombia to Guatemala, have been considering such a tax to alleviate their economic problems. These Latin American nations are responding to the crisis by hinting at a transition away from neoliberalism, something that Mexico's social democrat president began to do well before the pandemic.

With the collapse of the global economy, it's naturally becoming more obvious to the Latin American masses that revolution needs to happen. But the left won't make a new wave of anti-imperialist revolutions sweep the region by trying to pass bills in bourgeois parliaments. Bolivia's brutal U.S.-installed regime, which can be called a dictatorship due to its efforts to suppress its electoral opponents, will need to be toppled through potentially non-electoral means. Brazil's ruling class, which is preparing for unprecedented repression amid the country's recent turmoil, will need to be overcome as well. Chile's oligarch-run government will need to either somehow be voted out, or have its militarized police state be overcome through armed insurrection. Similar obstacles face the anti-imperialist movement in Honduras, Colombia, Ecuador, and the other Latin American countries that are on Washington's side.

Despite these obstacles, the region-wide backlash to neoliberalism and the rise of Chavismo have brought the anti-imperialist strains in U.S.-controlled countries closer to mounting an effective opposition. As Kats points out, the region is finding a kind of Marxism that addresses the essence of why so much poverty exists within Latin America: a cycle of wealth siphoning, perpetuated by IMF manipulations and multinational corporations, is keeping the Global South underdeveloped.

As the leftist and communist parties in these countries continue to orient themselves around fixing this problem, they'll gain the tools needed to counter the forces of capitalist reaction. Dependency theory provides the correct diagnosis for the problems with the region's material conditions, and therefore clarifies what will need to happen for these problems to be solved: a breaking of economic ties from imperialist corporate and financial institutions, ideally followed by the start of a Cuba-esque socialist development.

Related Topic(s): Capitalism; Class; Corporations; Exploitation; Financial; Pandemic, Add Tags
Add to My Group(s)
Go To Commenting
The views expressed herein are the sole responsibility of the author and do not necessarily reflect those of this website or its editors.