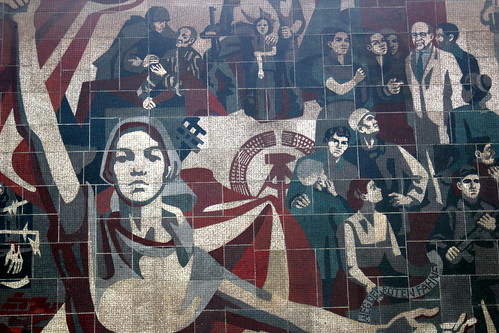 The more the popular backlash against neoliberalism develops, the more apparent it becomes that American society is heading towards a resurgence in pro-communist sentiments and organizing. The current presence of this Red revival is hard to see on the surface, since Bernie Sanders' FDR liberalism is still the main American political faction that's associated with the term "socialism." But as the class struggle continues, an actual manifestation of socialism and communism will begin to enter the mainstream.

The rise of communism in a highly unequal, post-recession American economy will be inevitable because whenever discontent grows around the miseries of capitalism, communism enters the conversation to some degree. There's a lasting power to an idea that's based in an irrefutable analysis of how capitalism perpetuates oppression and inequity, and that presents a tried and proven solution to capitalism.

From my perspective as a fairly well learned Marxist-Leninist, the only reason why not all poor and working class people embrace this idea is because of how good capitalism is at marketing "solutions" which reinforce the current system. Over 40% of Americans now favor socialism over capitalism, but the first political strain they encounter that associates itself with the word "socialist" isn't Leninism, Juche, or Maoism. It's Bernie Sanders' vision for a capitalist welfare state that continues the American imperialist project under a vaguely "socialist" banner. One doesn't encounter actual socialism until they enter the somewhat fringe realm of anti-capitalist organizing, and they aren't willing to embrace factions like Marxism-Leninism until they've unlearned the propaganda about the existing socialist states.

Yet the more these disaffected people grope for answers to our capitalist crisis, the more accessible communism becomes. "People are willing to listen and they ask what socialism is," the American Marxist leader Gloria La Riva said in 2016. "This year we have seen the fog of anti-communism being lifted from the minds of many, after more than 70 years of exclusion." The factor behind this cultural shift in communism's favor wasn't so much that Sanders had brought socialist terminology into the mainstream, but that widespread angst over inequality had led many people to question old narratives.

Again, it was inevitable that this opening for communism would appear in the 21st century, because our neoliberal order was designed from the start to create major contradictions within capitalism. The last half-century's paradigm of privatization, austerity, deregulation, and regressive taxation has been possible only through thoroughly dismantling the centers of social cohesion and pro-labor organizing. The crushing of unions throughout this time, precipitated by the decades-long American campaign to suppress and malign communists, pushed the left to the margins during the 1980s and onward. In the 90s, the Democratic Party was turned solidly towards a corporatist agenda, correlating with the fall of the Soviet Union and the subsequent weakening of the global socialist movement.

It was because Western society had committed itself to growing highly unequal that this post-Cold War capitalist triumph would soon be undone. The income gap in America has since risen to its highest level ever recorded, and the eight richest people now own as much wealth as the bottom half of the global population.

The latter statistic relates to the development of neoliberalism in the other core imperialist countries, and in the Third World countries where the U.S./NATO empire has carried out neo-colonialism. This extreme global inequality is why poor and working class people in Haiti, Honduras, Iraq, Lebanon, Chile, Ecuador, and Argentina have been protesting against neoliberalism during the last year. It's why anti-austerity protesters in France have been sustaining civil disobedience efforts since October of 2018. Despite the relative apathy of Americans so far, there's also been a vast uptick in American strikes during the last two years. After decades of declining living standards, the backlash from the masses is growing.

In America and abroad, the capitalist power establishment is responding to this social discontent by trying to divert its energy away from class struggle. The efforts from Washington to turn the Lebanon protests into an anti-Hezbollah campaign are an example of how bourgeois propaganda is seeking to distract people from actually moving towards revolution. Something similar has happened in Hong Kong, where the recent protests that have gained traction because of economic discontent have been turned into violent anti-communist demonstrations by relentless U.S. propaganda and organizational manipulation.

This is how the capitalist state has long strangled the emergence of an effective class revolt: co-optation, infiltration of movement leadership, and narrative management. During the era of the Black Panthers, which is arguably the last time communism entered the American mainstream, the government went so far as to assassinate the Black Panther Party's leaders. The capitalists will do anything necessary to safeguard against a revolution, including mass executions of communists like the ones that took place under Pinochet.

In recent years, the ruling class has been waging a war on dissent in response to the last decade's rise of class consciousness and online alternative media platforms. There have been unprecedented censorship measures from tech companies, the U.S. government has been forcing outlets like RT to register as foreign agencies, and an atmosphere of McCarthyism has re-emerged amid paranoia about foreign agents and "Russian propaganda." In the last year, the president of Veterans for Peace has been violently arrested for aiding anti-imperialist protesters at the Venezuelan embassy, and the anti-imperialist journalist Max Blumenthal has been detained on false charges. These attacks on dissent, as well as the anti-BDS laws and the campaign to prosecute Julian Assange for exposing government crimes, show how the system will respond when communism gains further prominence.

BDS, the journalism of WikiLeaks, the efforts of anti-war activists, and the other recent sources of opposition to global capitalism and imperialism represent seeds for the coming Red surge. While communism and its staunch anti-imperialist principles aren't supported by everyone involved with these anti-establishment strains, there's a potential for a lot more people to join the efforts of the most committed class insurrectionists. This is why the political and media class recently made a hysterical effort to vilify Cuba, and why Trump vowed in his second state of the union address to defeat socialism in Venezuela and elsewhere. There's more cause for ruling class alarm the more that class consciousness advances around the globe.

At least among the liberal capitalists, there's a desire to return society to its post-Cold War state so that the neoliberal order will become stabilized again; this is what the Bloomberg/Biden faction of the Democratic Party is frantically trying to accomplish by beating back at the populist Sanders faction. But the center was never meant to hold, because neoliberalism is designed to perpetuate a cycle of increasing inequality and inequality leads to instability. Some individual capitalists seek to reverse this process of inequality by adopting Sanders' vision for a welfare state, but the capitalist class is overall determined to preserve the neoliberal order.

They're determined to preserve neoliberalism because it's the system that's for so long allowed the corporatocracy to produce meaningful profits. Neoliberalism was adopted because capitalism was experiencing a recession during the 1970s, when the welfare state was last in a dominant form. Since then, neoliberalism has bought the capitalist class four decades of stability.

Yet in accordance with Marx' prediction about capitalism being destined to consume itself, that orderly period is now on the verge of ending. The looming economic crash could be the catalyst that makes anti-capitalist civil unrest break out not just in France and much of the Third World, but throughout the rest of the imperial core. Welfare statists like Sanders won't be able to turn this collapse around; the political future of the capitalist world is fascism, where the state cracks down in a desperate attempt to prevent revolution.

The more traction that communism gains, the more the capitalist class will resemble Jair Bolsonaro, the fascist Brazilian president whose state of mind Eric Nepomuceno recently described as follows: "The basic mission of the Brazilian right-wing extremist [Bolsonaro] is to give final combat to a communism that he detects, hiding everywhere even in his fridge every time he looks for cold water, and that makes him sleep very few hours every night, and always with a gun on his bedside table."

Related Topic(s): Anti-communism; Class War; Class Warfare; Imperialism; Instability; McCarthyism, Add Tags
Add to My Group(s)
Go To Commenting
The views expressed herein are the sole responsibility of the author and do not necessarily reflect those of this website or its editors.