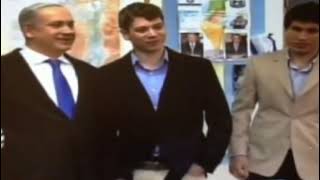 Last week, these cheerleaders for Jewish hatred described 27-year-old Yair Netanyahu as "awesome" and "a total bro" for posting a grossly anti-Semitic image on social media.

It depicts an Illuminati-like figure and a reptilian creature controlling the world through money and dark arts. Alongside them are a cabal of conspirators, their faces altered to include Mr Netanyahu's main opponents. They include George Soros, a Holocaust survivor who has invested billions in pro-democracy movements, and Ehud Barak, a former Israeli prime minister-turned-government critic.

This is not Yair's first troubling outburst. Last month, he decried demonstrators who opposed a rally by white supremacists in Charlottesville, Virginia, that left a woman dead.

These might be dismissed as the immature rantings of a wayward son had Yair not been groomed by his father as Israel's "crown prince." Netanyahu Jr was supposedly behind an online media strategy that steered Mr Netanyahu to electoral victory in 2015. He can be seen at his father's side at meetings with world leaders.

The Israeli media were shocked not only by the post but also by Mr Netanyahu's refusal to criticise his son. An editorial in Haaretz concluded that the prime minister's silence signalled his "consent to the ongoing demonization of anyone who doesn't get in line with the Israeli right."

In July, Mr Netanyahu met his Hungarian counterpart Viktor Orban, an ultra-nationalist who has led a xenophobic campaign against immigrants. In a bid to crush opposition, the Orban government has vilified Mr Soros, an American-Hungarian who promotes progressive causes. A billboard campaign against the billionaire unleashed a wave of anti-Semitism across the country.

Mr Netanyahu ought to have rushed to Mr Soros's defence. Instead, he echoed Mr Orban's incitement. Mr Soros, he said, had "undermined" and "defamed" Israel too -- by funding human rights groups opposed to the occupation.

Sympathy with the European and US far-right is not restricted to the Netanyahu camp. It is moving into the Israeli mainstream. Last week, the Herzliya Conference -- an annual jamboree for Israel's security establishment -- invited Sebastian Gorka as a keynote speaker.

Mr Gorka, another American-Hungarian and Mr Trump's former terrorism adviser, is a figurehead of the alt-right, a term for US white supremacist groups. Mr Gorka told the conference that Israel and the US were "founding members of the Judeo-Christian civilization" and would defeat their "common enemies."

Meanwhile, another US alt-right leader, Richard Spencer, appeared on Israeli TV last month to call himself a "white Zionist."

The affinity between Netanyahu's Israel and the West's far-right is understandable. Both detest a human rights discourse they have yet to crush. Both mobilize their supporters with dog-whistle Islamophobia. Both prefer militarized, fear-based societies and both share an obsession with Jew hatred.

Related Topic(s): Anti-semitism; Benjamin Netanyahu; Israel; Israel And Us Relations; Israeli Fascism; Yair Netanyahu; Zionists, Add Tags
Add to My Group(s)
Go To Commenting
The views expressed herein are the sole responsibility of the author and do not necessarily reflect those of this website or its editors.