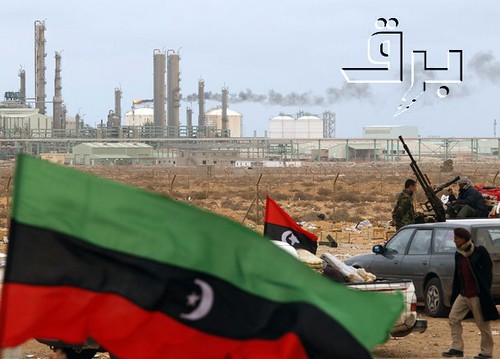 As the U.S. empire slowly crumbles, it's cutting its losses. This means waging ever-growing campaigns to destabilize the places that are slipping out of its control. Obama's 2011 destruction of Libya, where the richest democracy in Africa was bombed into nonexistence and NATO left the country a slave trade-ridden failed state, was a major step towards this new era of engineered apocalypse. Another was Washington's manufacturing of war in Syria in 2011, where the U.S. aided jihadists in a mission to overthrow Assad that's since cost half a million lives and displaced over 13 million people.

As the U.S. military itself observed in a climate report from 2019, the conflict in Syria was one of the 21st century's first examples of a war made possible by the climate crisis; the imperialists and their jihadist proxies took full advantage of the drought that Syria was experiencing. And the fact that that same report speculates about near-future conflicts which will be started by global warming (Bangladesh is named as a potential location for this due to its climate vulnerability) shows the imperialists aim to export the Syria model for destabilization. The same goes for the Libya model, which is more fitting with the report's recommendation for U.S. involvement in these climatically at-risk places: militarily intervene in the given country, using the climate crisis as justification. Alternatively, proxies could be used for this mission, whether they're religious extremists or paid mercenaries.

In the decade since the imperialists brought hell to these two countries, the Libya model has indeed been applied to an ever-increasing number of countries. The horn of Africa is the main place where this has so far happened, making Libya the regional starting point for a campaign of manufactured chaos which has spilled over into the country's surrounding lands. This broader model for African neo-colonization, summarized as follows by Eileen Whitehead of People's Daily, replicates the Libya destabilization model with an eerie amount of similarity:

The U.S. strategy in Africa is mainly to equip African forces and help allies like France abroad to build those nations' security capacities and stabilize the region"Some of the key ramifications of the U.S.'s misguided policy are: infringement on the sovereignty of peoples and nations; flagrant breach of international law; interference in internal affairs of other countries; a resort to intimidation and the logic of force; inducing paralysis of regional and international forums to render them susceptible to domination; invoking crises, conflicts, and polarization in order to manage the resulting chaotic situation; increasing attitudinal and cultural norms of demonization, condemnation, sanctions, punishment.

This broader imperialist Africa strategy is so similar to the Libya strategy because like the latter, the former wasn't even originally intended to create destabilization. The destabilization the horn of Africa is experiencing is the result of the failure of Washington's original strategy, like how Libya's descent into a failed state was the result of Obama's botching of what was supposed to be a successful nation-building project. (Obama admitted that this was the biggest failure of his presidency.) When Washington's nation-building model from the Iraq invasion has failed in these countries, it's had to resort to simply keeping them in a perpetual state of instability. Which isn't ideal for the imperialists, but is certainly better for their interests than allowing these countries to become stable, and then potentially building up anti-imperialist states.

This is the approach the imperialists have settled on in Afghanistan, which Washington is currently working to keep unstable through the proliferation of private mercenaries in place of the withdrawn official troops, themaintenance of the presence of special forces and intelligence operatives within the country, and the quiet aiding of a Uyghur separatist terrorist organization called the East Turkestan Islamic Movement. These measures are designed to keep Afghanistan chaotic enough for China to lack sufficient opportunities for constructing its Belt and Road Initiative infrastructure projects within the country. In other words, to condemn Afghans to a continued decline in living standards and ongoing atrocities from CIA death squads. All just so that the imperialists can score one geopolitical point.

The same purpose drives Washington's destabilization of the horn of Africa, which the imperialists seek to keep chaotic to stave off a further rise of Chinese investment across the continent. With Biden's first AFRICOM drone strike in the east coast African country of Somalia, which was carried out during this last month, the campaign is fast being expanded into Africa's other regions. Biden's drive towards expanding AFRICOM's general presence indicates that this will be the fate Washington tries to subject the entire continent to. As does the increasing militarization of society that's already taking place even within post-apartheid South Africa, where a rise in private police has been re-creating old racial inequities. They're trying to undo the legacy of Nelson Mandela so that their agenda of repression and privatization can be fulfilled.

In all of these places, the logical conclusion of what the imperialists and their aligned private military companies are doing is a larger version of Libya's chaos. And in Libya itself, these malign forces are determined to set back the country's last decade of rebuilding towards a stable state. Right when Libya's parliamentary speaker has warned that the country will be back to "square one" of destabilization if this year's planned elections are delayed, Washington's mercenaries are seeking to perpetrate just that kind of democratic sabotage. The United Nations reported this week that:

Some of the highly armed and well-trained private contractors operating in the country"meet the criteria for mercenaries, according to the Working Group [on the use of mercenaries). In addition to the dangers they pose within Libya, the independent experts warned that they could also threaten the security and stability of other nations in the region"In the UN-facilitated Libyan Political Dialogue Forum, which took place in Tunisia last November, participants agreed on a roadmap to credible, inclusive and democratic national elections, to be held on 24 December 2021. The independent experts stress that the removal of all mercenaries is a vital precondition to peaceful elections. "If elections are to be held in December 2021 as scheduled, Libyans should be able to undertake that process in a safe and secure environment, and the presence of these actors impedes that", said Ms. Aparac.

The imperialists have every incentive to use these mercenaries to throw a wrench in the democratic process; Gaddafi's son Saif al-Islam is likely to run for president so that he can restore the country to its old Pan-African model of robust social services and independence from imperial control. Should they try to pull such a coup against al-Islam, they may have to face the wrath of Libya's proletarian and anti-colonial revolutionary movement, in a similar way to how Bolivia's socialists forced through the reversal of 2019's CIA coup within the country.

When this confrontation with the forces of national liberation occurs, the imperialists want Libya to be destabilized to the maximum extent so that the proletariat will lack the means or organization for an effective rebellion. That's what they hope for, at least; Vietnam, Iraq, Afghanistan, and other U.S. foreign policy failures have shown how resilient guerrilla armies can be even when up against the world's most powerful military.

They'll eventually try the same desperate, scorched-earth tactic""the tactic of destroying a civilization just so socialists can't take over that civilization""in all the other countries in the Global South, and ultimately in the core imperialist countries when the revolutionary movement gets strong enough there. They've already been expanding it into Latin America; throughout the last month, the imperialists have been perpetrating a preemptive counterrevolution in Haiti, getting their Colombian mercenaries to assassinate the country's unpopular dictator so that they've then been able to replace him with their more politically palatable puppet Ariel Henry. Despite a brief scare that the imperialists and their regional proxies would invade Haiti, it appears they're backing away from this, asdescribed by foreign policy analyst Jonathan Katz:

This [intervention proposal] would be a terrible idea for many reasons. It seems, for the moment, U.S. President Joe Biden's administration is not eager to comply: On Saturday, an anonymous senior administration official told the Associated Press "the U.S. has no plans to provide military assistance at this time"""although FBI and Homeland Security officials are expected to help with the investigation. White House spokesperson Jen Psaki said Monday the request remains "under review." As it abandons one failed project in nation-building in Afghanistan, the White House is likely not eager to look like it is embarking on another project in the Caribbean.

This is because by its nature, imperialism can't successfully nation-build. The nation-building projects it's embarked on in Iraq, Afghanistan, and Ukraine have all resulted in these countries becoming either endless military quagmires or failed states, outcomes that the imperialists evidently see as too costly to replicate in places like Haiti. So all they can do is use their mercenaries, puppet leaders, sanctions, CIA operatives, and noncommittal military intervention methods to perpetually manufacture ever-expanding crises throughout the targeted countries. Crises so big that they're designed not to fortify the control of Washington's neo-colonial regimes within these places, but to diminish the capability for states to function so that revolutionaries can't gain control over those states.

The entire Global South, and ultimately the inhabitants of the imperialist countries, should watch out. Because as the climate crisis threatens the stability of all states, and as pandemic-era neoliberal inequality creates unprecedented potential for class struggle, the imperialists are going to increasingly resort to the scorched-earth option for holding onto power. They want to shrink the number of functioning states and depopulate the globe so that when global warming has destabilized most of the world, only the doomsday compounds of the super-rich will represent anything resembling civilization.

Related Topic(s): Global Capitalism; Imperialism, Add Tags
Add to My Group(s)
Go To Commenting
The views expressed herein are the sole responsibility of the author and do not necessarily reflect those of this website or its editors.