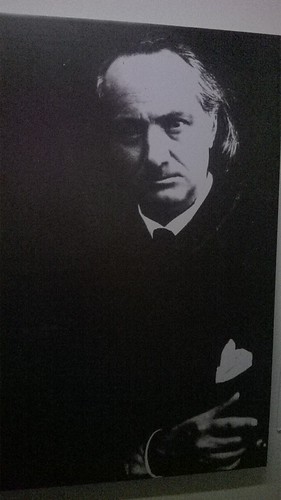 The frozen shark of climate change made of trash

Reminds us that our brains are relatively dead.

Anyone with a new Idea? We pay cash.

But I guarantee you, no one here is going to heaven.

But if someone doesn't take down that damn shark

I will probably keep posting but will change my name

So I can focus on my bite and less my bark,

From ennui, my revolutionary spirit to reclaim,

Who saw crystal-clearly through the darkening air.

Sometimes considered the first modern poet, Baudelaire produced two books that were important to my evolution as a poet: The Flowers of Evil (1857), and Paris Spleen. Paris Spleen was published posthumously. The former was a bit more raw, and he utilized the sonnet form to contain his "hot" materials. Baudelaire was a child of post-revolutionary France, when French urban society had fallen into a state of self-loathing torpor -- ennui. In Paris Spleen he has liberated his flowers of evil from the sonnet and explores much of the same territory through stream of consciousness prose poems.

Related Topic(s): Climate Change; Poems; Poetry, Add Tags
Add to My Group(s)
Go To Commenting
The views expressed herein are the sole responsibility of the author and do not necessarily reflect those of this website or its editors.