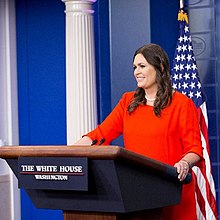 Sarah Sanders won, and it wasn't really a contest. As Donald Trump's press secretary officially exits the White House at the end of June, it's worth examining the extraordinary impact she had on how the Beltway press corps functions, and how news outlets barely put up a fight as she helped shred decades' worth of traditions and protocols designed to promote transparency. Indeed, White House reporters, who spent the previous year being lied to by Sanders and scolded by her in public for peddling "fake news," shamefully arranged to have drinks with her as part of a fond farewell. They lifted their glasses to a press secretary who hadn't held a White House press briefing in 100 days.

Killing off the press briefings, probably Sanders's most famous move, was one facet of an accelerated strategy to choke off press briefings and part of a historic, incremental effort by the Trump administration to lock out the press -- and, by extension, the public -- from the government's official duties and business. And it's not just about the White House: The Pentagon hasn't hosted a media briefing in more than a year. And while controversy spreads over the government's inhumane treatment of detained and separated child refugees, reporters are being kept out of key detention facilities, forced to rely on second-hand accounts regarding the deplorable conditions. "The blackout on press access has left Americans largely in the dark about conditions in government facilities designed to handle migrants who have crossed the border," the Washington Post reports. And that's exactly how the Trump team wants it: Americans in the dark.

That's because Trump views the press as another political target to punch, and he couldn't really care less about keeping journalists informed and extending cordial relations with them. That meant Sanders had less and less to do as she collected her $179,000 government salary. Even some White House insiders considered the communications shop that Sanders ran "irrelevant." Her team shrank dramatically as scores of assistants and deputies left the White House and their jobs went unfilled, in part because there's not much for communication staffers to do. In previous administrations, those support staffers helped the press secretary prepare for his or her daily briefings -- briefings that have been effectively eliminated under Trump. "Because only a few staffers remain, there is a lack of manpower for creating a broad messaging strategy," CNN recently reported.

Related Topic(s): Accountability; Media; Replacement; Reporters; Sarah Huckabee Sanders; White House; White House Press, Add Tags
Add to My Group(s)
Go To Commenting
The views expressed herein are the sole responsibility of the author and do not necessarily reflect those of this website or its editors.