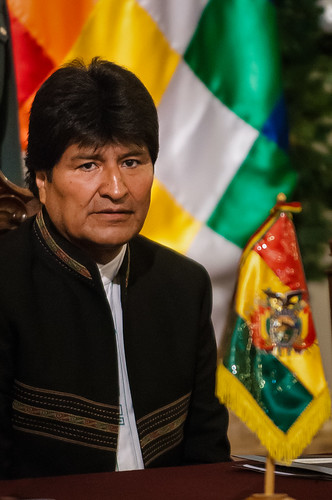 After five months of racist terror campaigns, illegal seizures of power, and violent intimidation tactics from the police and the military, Bolivia has become a far-right dictatorship. Amid months of propaganda from U.S. regime change agents who were determined to tarnish President Evo Morales' public image, Bolivia's U.S.-backed right-wing opposition responded to the October re-election of Morales by inciting political violence. Indigenous people were targeted with racialized terrorism, Morales' family and top officials were threatened, and the imperialist media manufactured sympathy for the white supremacist factions which were falsely claiming electoral fraud. Morales was forced to resign a few weeks after the election.

Morales was coerced into leaving by the far-right paramilitary forces of the racist millionaire Louis Fernandez Camacho, who helped compel Bolivia's military officials to recommend Morales step down. He was replaced by Jeanine Añez Chavez, a Christian fundamentalist who's called indigenous people "satanic." In the chaos following the coup, the new regime used violent intimidation tactics to target the indigenous socialists who were mobilizing against the illegitimate new government. The police and the military were given legal impunity to shoot those resisting the government, protesters were massacred, and groups of indigenous people were attacked with pogroms as an example to others.

The allies of the exiled Morales weren't able to overcome this, even as they gathered into militias and won some police personnel over to their side. The "transitional government" was solidified, and it's since become a dictatorship. It's privatized the water, expelled many foreign nationals, closed down the Bolivian TV networks of RT and TeleSur, detained foreign journalists, and created a squad of masked, armed death squads that terrorize resisters. To help ensure that it won't be voted out in May's election, last month the regime publicly mobilized the military in order to intimidate the population. Candidates from Bolivia's socialist party have been forced to organize abroad amid an atmosphere where opposition leaders have repeatedly been detained, and where critical journalists have been found dead under suspicious circumstances.

For all who care about indigenous rights, poor people's rights, democracy, and the environment, what's happened in Bolivia has been a tragedy of incalculable proportions. Morales cut poverty in half and reduced extreme poverty even further, and he was creating an eco-socialist Bolivia by giving the environment equivalent rights to human beings. His move to continue running for re-election was entirely legal and supported by the dominant facet of of Bolivia's voting population, and the U.S. media's disingenuous outrage about him "undermining Bolivia's democracy" has led to the creation of a genocidal dictatorship.

What is the lesson that the opponents of fascism, imperialism, and capitalism can learn from this? It's that socialists should always approach revolution with the goal of dismantling the structure of the capitalist state, as opposed to working around the power of the state.

It's not an absolute rule that socialists who've gained power through elections are overthrown, but it is a notorious trend. The Marxist Chilean president Salvador Allende was stormed by Chile's own armed forces in the 1973 coup that began the Pinochet regime. The rest of the history of CIA interference in Latin America shows numerous other elected socialist leaders who've been removed through what the scholar Steve Kangas described as "propaganda, stuffed ballot boxes, purchased elections, extortion, blackmail, sexual intrigue, false stories about opponents in the local media, infiltration and disruption of opposing political parties, kidnapping, beating, torture, intimidation, economic sabotage, death squads and even assassination."

These methods for destroying socialism are relatively easy. In the cases of fallen Marxist-Leninist states like the USSR and the GDR, the imperialists have more often had to resort to larger-scale and more difficult types of attacks. Defeating the USSR and its dependent socialist states required decades of military encirclement, economic warfare, and nuclear threats, which prompted the USSR's leadership to heavily invest in the military and make concessions to the imperialists through pro-capitalist reforms. This compounded the rightward ideological shift away from Marxism-Leninism that had been taking place in the USSR's bureaucracy, which could be considered a slow coup on the part of the imperialists. It culminated with the traitor Gorbachev, who sold his people out to neoliberalism.

And this long struggle to overthrow communism in Russia was far from the end of the threat to imperialism from Marxist-Leninist states. The People's Republic of China and the Democratic People's Republic of Korea, which both came to power with help from the Soviets, are now arguably stronger than ever in the face of frantic imperialist attacks against them. The U.S. lost the Vietnam War to Ho Chi Minh's Marxist-Leninist state, and Vietnam has remained socialist since then. The socialist governments in Cuba and Nicaragua, which both resulted from efforts to overthrow the capitalist dictatorships that had previously ruled these countries, remain undefeated after decades of imperialist sabotage.

It's no surprise that Muammar Gaddafi, one of the few socialist leaders who the U.S. has had to remove through an outright military invasion, took power through a coup instead of an election. History shows that socialist revolutionaries who've gained power through overthrowing the bourgeois state have had firm control over the state apparatus, making them nearly impossible to remove without a regime change war or decades of difficult cold war.

Venezuela's Chavistas are rare in representing perhaps the only decades-long surviving socialist government that came to power electorally. And the methods they've used to gain and maintain power resemble how Marxist-Leninist states have fortified control. Hugo Chavez was able to overcome neoliberal Venezuela's rigged political process by building a network of support within the military, which helped allow him to win the 1998 election with relative security against a coup. Chavez and his successor Maduro have been able to retain power after all the CIA's coup attempts foremost by maintaining control over the military.

I think that many factors beyond the control of Morales prevented him from creating such a solid power structure (like the strength of the Bolivian bourgeoisie compared to the relative weakness of the Venezuelan bourgeoisie), while he can also be blamed for it in other respects (such as his decision not to create an armed revolutionary defense wing like Maduro has). But judging Morales as an individual isn't the point of this essay. It's to point out that in a capitalist-run electoral process, the capitalists have the upper hand, so they can remove a leader they don't like fairly easily.

If Bolivia's socialist candidates are prevented from winning May's election, it will prompt the country's proletarian movement to take a route towards socialist revolution that's always been its most realistic option for victory: overthrowing their capitalist government and creating a dictatorship of the proletariat. The same is the case for the socialist movement in every other capitalist country in the world, especially in the countries whose democracies have deteriorated in ways comparable to Bolivia's.

Related Topic(s): Bolivian Coup; Coup; Imperialism; Revolution; State, Add Tags
Add to My Group(s)
Go To Commenting
The views expressed herein are the sole responsibility of the author and do not necessarily reflect those of this website or its editors.