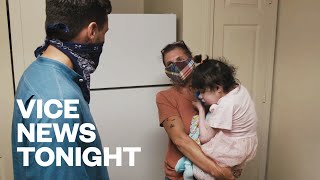 What It's Like to Be Evicted in the Middle of a Pandemic The U.S. may soon be facing an .eviction apocalypse.. With the CARES Act set to expire, some experts estimate up to 28 million people could face losing their ...
(Image by YouTube, Channel: VICE News)   Details   DMCA

People being evicted from their home.

There's a Jimmy Dore video titled, "Evictions Crisis While Dems & Republicans Do Political Theater."[1] It's a must see.

In real time it shows a sheriff in Houston, Texas evicting families from their apartments, people unable to pay their rent because they're unemployed and out of work.

Dore says there'll be some 40 million evictions-though an unsubstantiated figure-is quite possible since the CARES act, that included a moratorium on evictions in federally subsidized housing expired on July 27 and Congress failed to pass an extension.

According to the National Low Income Housing Coalition, "The Centers for Disease Control and Prevention (CDC) issued a temporary national moratorium on most evictions for non-payment of rent"...and is in effect from September 4 to December 31, 2020.

Apparently the authorities in Houston didn't see the CDC order or ignored it as it proceeded with the evictions.

States, cities, counties and local jurisdictions have enacted their own legislation to prevent evictions but with tax revenues down they're running out of funds to ameliorate the crisis.

The State of New York had a statewide prohibition on all evictions that expired on June 20. New York City courts paused all eviction proceedings until August 5. It's not clear whether evictions are now proceeding.

There's also the cascading effect on owners of rental properties when the renters are unable to pay their rent. Many of these landlords are mom and pop enterprises with mortgages on their properties. With no rents coming in they could be facing foreclosure on their mortgages.

Of course the Covid-19 epidemic is exacerbating the situation with the lockdowns, many businesses closed (some permanently), people becoming unemployed, no income, unemployment benefits expiring for many and the Congress stalemated.

In Congress the Dems control the House while the Repubs control the Senate. They can't agree on what to enact for renters to get adequate aid and prevent evictions particularly while Covid restrictions persist into an unknown future.

Watching Dore's video of people tossed out of their homes is rough viewing but necessary. Because it makes one ask sort kind of country lets such a travesty happen?

If the government can't do what's necessary protect its people in need then what is it good for?

Retired. The author of "DECEIT AND EXCESS IN AMERICA, HOW THE MONEYED INTERESTS HAVE STOLEN AMERICA AND HOW WE CAN GET IT BACK", Authorhouse, 2009
Related Topic(s): America; Congress; Corona Virus Coronavirus Covid-19; Evictions; Families; People; Unemployment, Add Tags
Add to My Group(s)
Go To Commenting
The views expressed herein are the sole responsibility of the author and do not necessarily reflect those of this website or its editors.