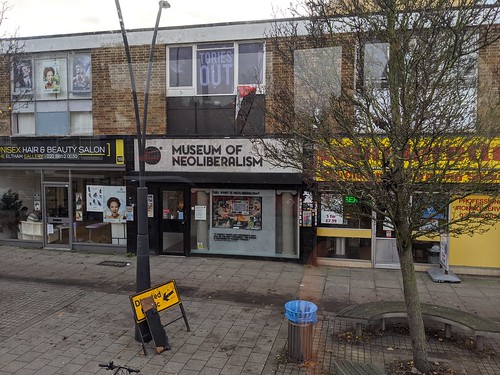 With the 2020 election and all of its related crises, the integrity of the "democracy" of the United States has been weakened more than ever. Donald Trump's attempt at a coup may be futile, but he's unleashed a cultural pathology among his most loyal supporters that further degrades our political discourse's connection with reality. And the Biden government will facilitate the neoliberal policies and imperialist machinations that are accelerating the country's transformation into a failed state. The members of Trump's cult will provide the culture that fills the ideological vacuum within this declining society.

Trump's absurd campaign to portray himself as the real winner of the election might essentially be nothing but a glorified temper tantrum, but it's made the U.S. cross a threshold which is likely unprecedented. Now a president is inventing their own reality to the extent that they've gotten a good amount of their base to deny the empirical reality of their electoral defeat. This alternative reality is being largely legitimized by Republican leaders and pundits, and Trump's diehard supporters are gravitating towards more extreme right-wing demagogues like Alex Jones to satisfy their confirmation bias over the election.

Trump's narrative about the election being rigged against him is the latest step in the trend towards hyper-partisanship that's been afflicting U.S. political discourse in recent decades. And like Russiagate, the liberal conspiracy theory that Trump won because of Russian interference, it will end up bringing the country even further from a place that can legitimately be called democratic. Russiagate brought about unprecedented expansions of online censorship and normalized a pattern of McCarthyist attacks against anyone deemed to be a "foreign agent." The even more unhinged "Trump was robbed" narrative will exacerbate the paranoia of those on the right, while giving the intelligence agencies and tech companies more excuses to censor online speech.

"We're in the civil war," recently said the host of the pro-Trump militancy training YouTube channel BlackScoutSurvival, who's promoted ideas about mass shootings being false flags, hassaid that "we may have to do something" in order to defend the country from supposedly traitorous actors within the political system, and believes that Trump is defending from an attempt to steal the election. "Just because people aren't shooting in the street doesn't mean it's not a war. What this is a psychological operation done by media, mainstream as well as social media, big tech. They've controlled the narrative amongst everything, trying to place who they want into power."

A twisted false consciousness drives these right-wing militia types. Drawing upon legitimate fears of government repression and corporate censorship, they adhere to an ideology of paranoia towards an amorphous array of ideological threats. They view everything through the lens of the culture war that's perpetually stirred up by reactionary propagandists, with the materially relevant issues related to environmental destruction, geopolitics, and socioeconomic inequality being pushed aside.

Nonetheless, the realities of U.S. society's late-stage imperialist descent into neoliberal economic ruin has an impact on how these reactionaries behave, even if their political myopia prevents them from seeing the bigger picture. The unemployment explosion and mass business shutdowns of this year have materially impacted Americans of all political leanings, with the reactionaries responding to their predicament by organizing mask-free rallies to end the measures against the "hoax" virus. Such will be the kinds of narratives that fill up our culture as the masses react to the ever-increasing neoliberal economic destruction around them.

And despite the right's portrayals of Biden as a radical socialist, the structure of corporate despotism is going to be strengthened in the next four years like never before, with most of the population sharing in the brutal economic consequences. Biden and his team clearly aim to carry out austerity measures-in fact, it's arguable that Biden was able to win because most of the capitalist ruling class decided he'll be more effective at enacting austerity than Trump. Aside from his planned executive orders to undo some of Trump's most egregious deregulations, Biden won't introduce legislation to dismantle corporate power; he's outright promised to his Wall Street donors that he won't do this. What's also certain to happen is Biden's expansion of the war machine; Biden and his pro-war think tank staffers aim to expand the militarization of the lands surrounding the DPRK and China, continue the drone wars and occupations in the Middle East and Africa, and keep treating Yemen as a ground for proxy warfare with Iran (to the consequence that Biden's promise to end the war in Yemen is likely bogus).

For the global victims of U.S. imperialism, this will mean greater exposure to Washington's violence as Biden attempts to rebuild American imperial hegemony. For those within the imperial core, this will mean further losses of freedoms and greater economic deprivation. Next year the U.S. will be steadily at war for twenty solid years, and an empire can't be at war for this long without serious deteriorations of the internal civil liberty safeguards which once held more relevance within it. The expansions of the surveillance state, continued war on whistleblowers, censorship measures, police militarization, and arrests of political dissidents which will be carried out under Biden will all be built off of the steps towards fascism that have long been present amid this war paradigm. As Christian Sorensen writes in his post-election article The Military-Industrial-Congressional Complex Is Fascism:

People of color, long denied even a taste of democratic pretense, are policed intensely by overmilitarized local and state law enforcement that are armed by the war industry. They are then stuffed at disproportionate rates into the prison system where they're used as cheap labor. (Federal Prison Industries, a corporation owned by the U.S. Federal Bureau of Prisons, makes a lot of light gear and clothing for the military.) The Commission on Presidential Debates doesn't even allow non-corporate parties to participate, effectively banning anti-war discourse. Organized labor is dismantled piece by piece, helping corporate criminals, to the working class' detriment. The fascist system then draws support from chunks of a white working class that lives precariously (due to bipartisan abuse and imposition of neoliberal economic policies outsourcing jobs and automating the rest). An invasive surveillance state and armed bureaucracies at the federal, state, and local level protect the status quo.

This is the ironic relationship that the armed reactionaries in this country have with the state; they can be easily riled up towards outrage at the overreaches of the U.S. national security apparatus, but only when it relates to their own cultural conflicts and not when it relates to state violence against people of color. And when the state-even when it's run by a Democratic president-needs them to provide arms to defend the colonial system, they'll reliably come to its aid. Under this dynamic of a self-reinforcing fascistic culture, the neoliberal inequalities that afflict these members of the precariat can actually be used to further motivate them to defend the interests of the state which is behind these inequalities.

In a situation where seemingly tens of millions of these types now disbelieve the results of the election just because Donald Trump told them to, it's unlikely that they can be brought towards class consciousness. Our immediate future in the United States will be defined by ever-escalating systemic injustices which get reinforced by the nihilism, paranoia, and shallow individualism of reactionary society. And since the capitalist ruling class is committed to perpetuating neoliberalism and imperialist war, we won't be able to end these things through protests or electoral politics; the Democratic Party and the country's other oligarchic institutions won't allow a social democrat like Nina Turner or Alexandria Ocasio-Cortez to win. Not in 2024, not in 2028, and not any time later.

What we class conscious people can do is build the institutions that have the potential to become the vanguards for an eventual proletarian revolution, and educate the masses about why such a revolution is their only way out of the neoliberal nightmare.

Related Topic(s): Austerity; Censorship; Fascist; Neoliberalism; Trump, Add Tags
Add to My Group(s)
Go To Commenting
The views expressed herein are the sole responsibility of the author and do not necessarily reflect those of this website or its editors.