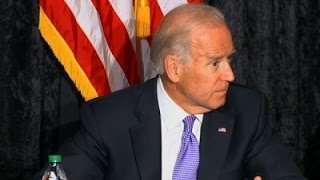 Biden on Iran: 'This is a Good Deal' Speaking to Jewish leaders in Florida, Vice President Joe Biden spelled out his support for a nuclear deal with Iran, telling the group, .This is a good deal.
(Image by YouTube, Channel: Associated Press)   Details   DMCA

Biden in Florida speaking with Jewish leaders telling them, "This is a good deal" regarding nuclear deal with Iran. Date unspecified.

Sometimes there's a revelation that wasn't considered yet when discovered is quite important.

The election of Joe Biden could result in the US returning to the 2015 nuclear deal with Iran.

After all Biden was vice president under Obama who signed the deal along with Britain, France, Russia, China and Germany, the P5 +1 and Iran.

Of course Trump reneged on the deal in May 2018 while all the other signees wanted to save it. They've attempted various means to save it yet thus far unsuccessful.

Iran meanwhile has gone beyond certain measures contained in the deal, particularly the limits on enriching uranium, still not weapons grade, but a substantial increase never the less.

Iran considers it their right to increase the enrichment levels as the deal no longer exists.

Then consider the following:

Soon after reneging on the deal Trump re-installed the economic sanctions on Iran that existed prior to the 2015 deal.

Then there was the January 3rd missile assassination of Iranian Major General Qassim Suleimani ordered by Trump outside the Baghdad airport where the general was traveling.

Retired. The author of "DECEIT AND EXCESS IN AMERICA, HOW THE MONEYED INTERESTS HAVE STOLEN AMERICA AND HOW WE CAN GET IT BACK", Authorhouse, 2009
Related Topic(s): Iran; Iran Nuclear Deal; Israel; Trump, Add Tags
Add to My Group(s)
Go To Commenting
The views expressed herein are the sole responsibility of the author and do not necessarily reflect those of this website or its editors.