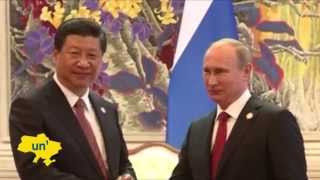 Russia and China Sign Mammoth Gas Deal: Moscow seeks to counter EU and US sanctions over Ukraine After more than a decade of negotiations, China and Russia have signed a mammoth natural gas supply deal estimated to be worth over USD 400 billion that ...
(Image by YouTube, Channel: Ukraine News One)   Details   DMCA

This past weekend this writer attended what was called "Divest from the War Machine Summit" in Washington, D.C.

Organized by "Code Pink" the group invited some fine speakers including Lawrence Wilkerson, Colin Powell's former chief of staff giving an insider's view to some of the machinations of the US war machine.

The intent of the "summit" was to explore ways to divest from the US war machine which could eventually impact the Defense"War"Department current war making ways. It centered around mobilizing activists in joint efforts i.e. protests, demonstrations at Congressional offices as well as promoting individual personal divestment strategies that could have some impact in changing the Pentagon.

Though the idealism of the attendees was palpable to this participant the "summit" seemed more the good liberal's hopes and dreams rather than recognizing any impactful way of "divesting" from the war machine.

However I was able to mention there was a significant "divestment" strategy already occurring in the world. Countries have begun trading in their own currencies completely by-passing the dollar.

Though the point was taken, sadly it was essentially dismissed by the organizers in favor of more personal and group strategies for the participants to consider.

But consider, countries trading in their own currencies and by-passing the dollar such de-dollarization could have a major "divestment" impact on the dollar remaining as the world's reserve currency.

As we know the US has accumulated some $21 trillion in debt.

The US economy has been able to survive as other countries have supported that debt by purchasing $billions of dollars printed by the FED in the form Treasury bonds-which helps prop up the dollar as the world's reserve currency.

Let's remember these dollars printed by the FED are not backed by gold. Nixon in 1971 dropped the gold standard backing US dollars and in an agreement with Saudi Arabia all subsequent oil transactions between countries would be required to be transacted in dollars thus establishing the dollar as the world's reserve currency.

Thus under this dollar denominated system all trading of oil, natural gas, coal had to be transacted in dollars which buttressed the dollar as the world's reserve currency.

Yet that system created indebtedness, austerity measures, economic sanctions on some countries. In order to pay off the indebtedness countries were required to pay in dollars thus further propping up the dollar as the world's reserve currency.

However something significant happened. An alternative trading development occurred.

China and Russia, the latter in particular, under economic sanctions imposed by the US in May, 2014 signed a $400 billion agreement over 30 years for China to buy Russian natural gas purchased in the Chinese Yuan completely by-passing the dollar. Significantly, the Chinese Yuan is backed by gold.

Retired. The author of "DECEIT AND EXCESS IN AMERICA, HOW THE MONEYED INTERESTS HAVE STOLEN AMERICA AND HOW WE CAN GET IT BACK", Authorhouse, 2009
Related Topic(s): Austerity; Divestment; Dollar; Gold; Iran; Oil; Sanctions; Trade; Yuan, Add Tags
Add to My Group(s)
Go To Commenting
The views expressed herein are the sole responsibility of the author and do not necessarily reflect those of this website or its editors.