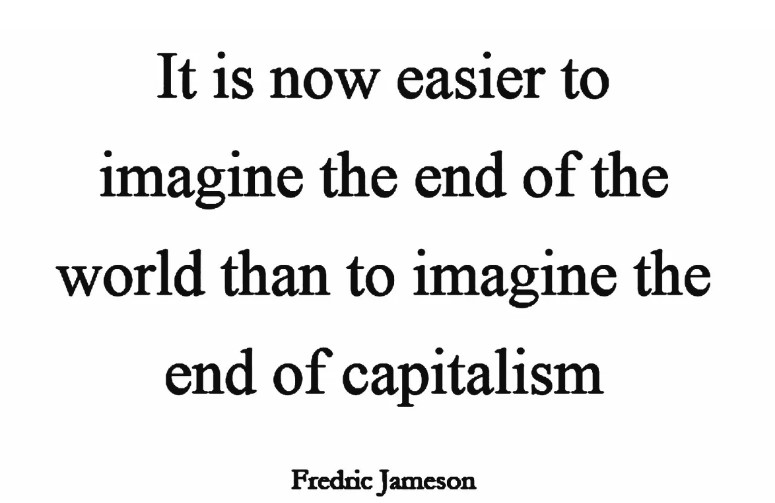 In a 2014 article, Marquette University's Gerry Canavan observed the relationship between capitalist realism--the view that capitalism is the only viable system--and necrofuturism, the view that humanity is headed for dystopia and apocalypse. "Necrofuturism premediates the unhappy economic and ecological future that will emerge out of current trends," he wrote, "but not in a register that suggests or nurtures alternatives; rather, necrofuturism resigns us to a coming disaster we can anticipate but not prevent."

Necrofuturism is a convenient philosophy for the capitalist ruling class, because it abdicates them of moral responsibility for the ecological catastrophes, wars, and explosions of poverty that the system is taking the world towards. The rising sea levels, the droughts, the refugee crises, the conflicts, the economic unravelings--none of these things make it worthwhile to create a better system. Capitalism can be utilized to positively respond to these crises, the system's defenders figure. Besides, the alternative is communism, which is unquestionably worse than what capitalism has to offer.

This is why anti-communist propaganda is crucial for maintaining this loyalty to capitalism amid all the horrors that capitalism is producing: it provides a rationale for rejecting the solutions that the communists have presented, for claiming that no matter what, the present system is better than what anti-capitalist arguments lead to. As French philosopher Alain Badiou writes in a passage that Canavan's paper quotes:

A brutal state of affairs, profoundly inegalitarian--where all existence is evaluated in terms of money alone--is presented to us as ideal. To justify their conservatism, the partisans of the established order cannot really call it ideal or wonderful. So instead, they have decided to say that all the rest is horrible. Sure, they say, we may not live in a condition of perfect Goodness. But we're lucky that we don't live in the condition of Evil. Our democracy is not perfect. But it's better than the bloody dictatorships. Capitalism is unjust. But it's not criminal like Stalinism.

These arguments for capitalism's continuation are predicated upon a view of the history of communism that capitalist, pro-imperialist institutions have themselves constructed. If the public is led to believe that Stalin deliberately starved Ukraine, even though this is a misleading claim that originated from Nazi propaganda, it's easy to argue that communism is a force for evil. If the media says that China is interning over a million Muslims, even though this is a similarity misleading claim that comes from U.S.-backed Chinese regime-change organizations, it seems reasonable to accuse communists of supporting a genocidal ideology. If Stalin, Mao, Castro, Xi Jinping, the Kims, and the other communist leaders are all consistently characterized as "dictators" by bourgeois academic and media sources, even though all of these leaders have been elected through proletarian democracy, the pro-capitalist arguments gain more perceived credibility.

No matter how divorced from reality these anti-communist arguments are, they serve to keep the legitimacy of "capitalist realism", and therefore of deterring people from taking serious steps to replace the system. This is because they don't just stop reactionaries and liberals from embracing a revolutionary mindset; they stop many anti-capitalists from aligning with the Marxist-Leninist movement out of the belief that communism leads to "dictatorships".

When anti-communist propaganda has become the commonly accepted version of reality throughout capitalist society, one can find self-identified socialists contradicting their own stated goals by arguing against capitalism in one moment, while acting like the anti-communist slanders are true in another moment. Take the example of left-wing commentator Nathan J. Robinson, who's written:

It's incredibly easy to be both in favor of socialism and against the crimes committed by 20th century communist regimes. All it takes is a consistent, principled opposition to authoritarianism... When anyone points me to the Soviet Union or Castro's Cuba and says "Well, there's your socialism," my answer isn't "well, they didn't try hard enough." It's that these regimes bear absolutely no relationship to the principle for which I am fighting. They weren't egalitarian in any sense; they were dictatorships.

This is the inverse of the "socialism is evil because socialist countries are evil" position: "Socialism is good because those evil countries aren't really socialist." Since both positions rely on accepting capitalist propaganda, it's easy to see how the latter can lead to ineffective attempts at resisting capitalism. It makes anti-capitalists try to latch on to various anti-communist brands of leftism, from the anti-Marxist ideology of anarchism to the Eurocentric ideology of Trotskyism, all out of fear of being labeled an "authoritarian socialist".

Related Topic(s): Anti-communism; Capitalism; China; Conservatism; Ideology; Leftist; Neoconservatives; Nihilism; Propaganda; Reactionary; (more...) Socialism, Add Tags  (less...)
Add to My Group(s)
Go To Commenting
The views expressed herein are the sole responsibility of the author and do not necessarily reflect those of this website or its editors.