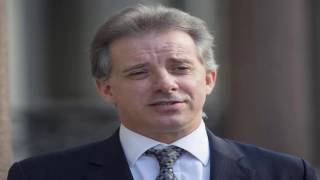 First, a bit of background.

One: Russia had strong blackmail material on Trump and could thus control him;

Two: Most damning in that material, Trump used prostitutes while he was in Russia, and paid several of them to urinate on a hotel bed Obama had once slept in;

Three: Russia hacked DNC (Democratic National Committee) emails and passed them on WikiLeaks, who published them. The emails were damaging to Hillary and helped Trump win the election;

Major media are now covering the Trump dossier from a new angle -- who paid a British ex-spy to assemble it?

And the answer everyone already knew -- Hillary Clinton's camp and the Democratic National Committee -- is out in the open.

During the 2016 presidential campaign, the Hillary team and the DNC funneled some $9 million to a Hillary lawyer, Marc Elias, and his law firm, Perkins-Cole.

That money then went to a research firm, GPS Fusion, who passed some part of it on to a British ex-spy, Christopher Steele. Steele had once worked in Russia and allegedly had many connections there.

Steele put together the Trump dossier after consulting with a number of Russians and spreading some money around. He gave the dossier to his employer, GPS Fusion. The dossier found its way to many media outlets, who sat on it for a while and eventually decided to run with it and slam Trump without let-up.

Related Topic(s): Dirty Tricks; HACKED; Steele Dossier; Trump And Putin; Wikileaks, Add Tags
Add to My Group(s)
Go To Commenting
The views expressed herein are the sole responsibility of the author and do not necessarily reflect those of this website or its editors.