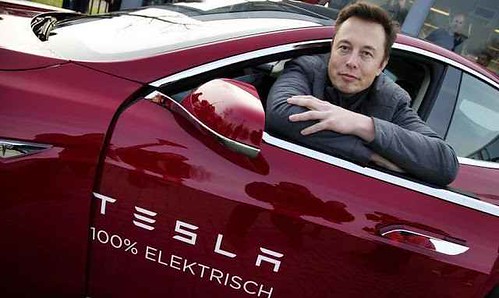 Elon Musk, we will coup whoever we want.
(Image by automobileitalia)   Details   DMCA

As Washington's global influence rapidly diminishes, I'm picking up on a trend in how the U.S. imperialists operate: sporadically attempting to snatch up resources from other countries in desperate efforts at regaining what the empire has lost. This contrasts with the way that the U.S.-centered corporatocracy very smoothly exploited other countries when the empire was at its peak around the mid-20th century. In many cases, it was as easy and concealable as pressuring a poor country into becoming part of the corporatocracy's business circle through some aggressive business deals.

In the modern world, this invisible type of imperialism is getting harder for them to pull off. They've still been able to carry it out to a certain extent in recent years, like when Washington has pressured Ecuador's president Lenin Moreno into intensifying the country's neoliberal austerity policies. But in a world where China is quickly rising, U.S. influence is waning in the Middle East and most other regions, and class conflict is rising amid decades of growing global inequality, the imperialists are often resorting to blatant theft. Not the seizing of foreign productive forces, like was the case during the earlier era, but the piracy of any wealth or resources that they can possibly grab up.

One example is when the UK High Court blocked Venezuela's attempt to access over $1 billion worth of gold this June, with the court having weakly argued that Nicolas Maduro has no right to the gold because the UK recognizes Guaido as the rightful president. This act of naked imperialist kleptocracy is becoming representative of how the empire functions: with resource-snatchings that are unsupported by any feasible plan for imperial expansion. It's like micro-militarism, the historical phenomenon where dying empires lash out with desperate military adventures.

The Bolivia coup is another example. Washington's effort to turn Bolivia into a neo-colony has been unstable from the start, with the coup leaders having failed to assassinate the leader they ousted and the new far-right regime having been met with widespread militant resistance. Despite extreme repression from the coup regime, large parts of the country have come under the jurisdiction of the armed indigenous movement, and this movement has continued to sabotage the regime's policies.

This great obstacle to multinational corporations' goal of stealing Bolivia's lithium shows the limits to the empire's ability to recolonize the region. Elon Musk may be acting as South America's neo-conquistador, but the attempts at resource-grabs from him and other imperialists aren't nearly as easy as past neo-colonial projects have been. This has forced the coup regime to mobilize the military and utilize death squads in the hope that these drastic acts of violence will bring balance to a less-than-ideal situation.

Another one of these late-stage imperialist heists is Washington's recent oil grab in Syria. After Trump made a show out of supposedly pulling out of Syria last October, Trump announced that "We're keeping the oil" in Syria while insisting on using force to protect the troops who were securing the oil for the U.S. This was a blatant war crime, but the U.S. seemingly doesn't at all care how it looks anymore. All that matters is pure international kleptomania.

Since then, Washington has used its proxy forces in the Autonomous Administration (better known as the YPG) to illegally exploit oil that rightfully belongs to Syria. After signing an agreement with the YPG to split control over the oil, a process of theft has been set in motion whose logistics are described by Voltairenet.org as follows:

Production is expected to start at 60,000 barrels/day and could quickly rise to 380,000 barrels/day"Crescent Energy Services, which penned the agreement, is a CIA front registered in the tax haven of Delaware, but based in Louisiana. According to our sources, the profits of the Autonomous Administration will be divided in two: half for itself, and the other half for the CIA, which will use the money to finance its covert operations throughout the world without having to submit a budget request to Congress.

Related Topic(s): Capitalism; Exploitation; Inequality; Kleptocracy; Marx; Plutocracy; Venezuela, Add Tags
Add to My Group(s)
Go To Commenting
The views expressed herein are the sole responsibility of the author and do not necessarily reflect those of this website or its editors.