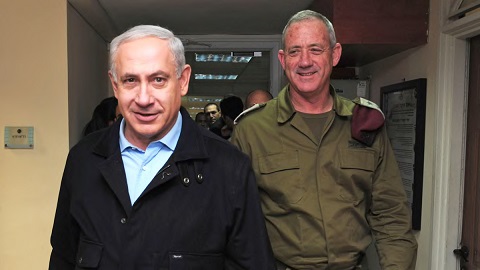 Benjamin Netanyahu, Israel's caretaker prime minister, is preparing to squeeze every last drop of personal advantage from a local and global crisis caused by the coronavirus pandemic. He has needed to move fast.

Following this month's election, Netantyahu's efforts to establish a governing coalition appeared to have been thwarted yet again for the third time in a year of elections. His ultra-nationalist bloc fell short by just three seats of winning a majority in the Israeli parliament.

And looming large has been his trial for corruption, which was due to start on Tuesday. His main opponent, former general Benny Gantz of the Blue and White party, vowed during the campaign not to sit in a government with Netanyahu as long as he faces criminal charges.

But the coronavirus crisis may yet come to Netanyahu's rescue.

Last week he ordered a raft of emergency measures, including the effective closing of the country's borders, and the shutting of schools and colleges, as well as large parts of the economy. Tens of thousands of Israelis have been required to quarantine themselves at home, and gatherings of more than 10 people are banned.

Given Israel's self-proclaimed status as a sanctuary for Jews, following the trauma of the Holocaust, these precautions have been readily accepted by the public.

But they are also playing to Netanyahu's talent for manipulating a crisis.

On Sunday his trial was postponed for at least two months, after the justice minister, his appointee, declared new powers and effectively shuttered the courts.

Now pressure is mounting on Gantz to set aside "petty politics" and support Netanyahu in a unity government embracing the main Jewish parties. The prime minister told his rival: "Together we will save tens of thousands of citizens."

Gantz is struggling to resist. The election and the resulting political impasse was bad for him, too: his party won three fewer seats than Netanyahu's Likud.

If the pair do not agree a unity government, Israel is most likely heading for a fourth election and one in which an exasperated public might punish the Blue and White leader for refusing to compromise.

Gantz should be sitting pretty, given that he heads a bloc that commands a 62-seat majority in the 120-member parliament. But deep internal tensions in his bloc are already bedevilling efforts to oust Netanyahu.