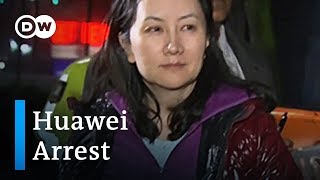 The December 1 arrest by Canadian authorities in Vancouver of Huawei Technologies chief financial officer Meng Wanzhou, based on a US extradition warrant, represents a draconian extraterritorial application of a dubious US law and claim of Huawei's sanctions violations regarding Iran. Meng was arrested at Vancouver International Airport, while a transit passenger changing planes.

Meng stands accused by the Trump administration of having used Skycom, a Huawei subsidiary based in Hong Kong, to evade American sanctions against Iran between 2009 and 2014. A British Columbia judge granted Meng bail, set at $7.4 million. She was required to surrender her passports to Canadian authorities.

Although Meng stands accused by the US Attorney's Office in Manhattan of violating US trade sanctions on Iran and lying to HSBC Bank in furtherance of the alleged sanctions busting, Donald Trump told Reuters that he may use the arrest of Meng as a bargaining chip with China over current trade negotiations between Washington and Beijing. Essentially, Trump believes Meng to be a US hostage, available to trade off with Beijing in the current Sino-US trade war.

Trump's comments, which suggested Meng is a political pawn, threw into question the US legal case against Meng and drew sharp criticism from Canadian Prime Minister Justin Trudeau, who said that Canada would abide by the rule of law and not "what goes on in other countries."

In June of this year, Trump dropped the threat of US sanctions on the Chinese telecommunications firm ZTE for allegedly selling its products to Iran and North Korea. US firms that supply components to ZTE would have faced possible job layoffs and bankruptcy had ZTE been sanctioned. The ZTE affair, again, showed that the extraterritorial application of US law against companies and individuals with commercial links to Iran is not in the national or economic security interests of the United States, but of Israel and, to a lesser extent, Saudi Arabia.

America's extraterritorial application of its Iran sanctions laws, which are largely driven by the powerful Israel Lobby in Washington, in addition to Canada's acting as Washington's brigand in seizing Meng, is not playing well in China. The Chinese Foreign Ministry called in American Ambassador Terry Branstad and Canadian Ambassador John McCallum and warned them that Meng's arrest was "lawless, reasonless and ruthless."

China also arrested Michael Kovrig, a former Canadian diplomat who had been posted to China and Hong Kong, in a move seen as a response to Meng's arrest. Kovrig was in China under the auspices of the International Crisis Group, a non-governmental organization with longstanding links to the US Central Intelligence Agency. Michael Spavor, a Canadian businessman, was also detained in China in a growing feud between Beijing and Ottawa brought about by Meng's arrest. Spavor owns the Paektu Cultural Exchange, a company that arranges trips by Westerners to North Korea, a nation also subject to stringent US sanctions. Spavor is also close to North Korean leader Kim Jong Un.

The Chinese vice foreign minister, Le Yucheng, warned Branstad about "the vile way" in which, Meng, the daughter of Huawei founder Ren Zhengfei, was arrested in Canada. The Chinese Foreign Ministry also told Canadian Ambassador McCallum to relay to Ottawa its demand for the immediate release of Meng, who was, until 2009, a permanent resident of Canada.

The arrest of Meng represents an unusual extraterritorial application of US law to Meng, a foreign national, in a third country, Canada. The extradition of Meng to stand trial in the United States for a Chinese firm's commercial links with Iran is highly dubious under international law. The arrest of Meng has sent a chill through foreign firms that continue to maintain commercial ties to Iran after the Trump administration's unilateral withdrawal from the Joint Comprehensive Plan of Action (JCPOA) nuclear agreement between Iran and China, Russia, and the European Union.

The arrest of Meng also shreds the post-G20 trade war truce recently agreed to by Trump and Chinese President Xi Jinping in Buenos Aires. Making matters worse, Trump was dining with Xi in Buenos Aires at the very same time that Meng was arrested in Canada.

The average Chinese men and women on the street are so outraged by the US-directed arrest of Meng, they unabashedly speak to foreigners about going to war with the United States. Trump warned countries still adhering to the terms of the JCPOA that his administration would criminally sanction them and their companies if they continued financial links with Iran after the US unilaterally imposed drastic new sanctions against Iran on November 4. The Trump administration's reimposed sanctions were pressed by US National Security Adviser John Bolton and Secretary of State Mike Pompeo, both of whom take their direction from the government of Israel and its powerful interlocutors in Washington's lobbying and political donor sectors, as well as Trump son-in-law Jared Kushner.

Another nation that could feel the wrath of Washington is Algeria. Its state-owned oil company, Sonatrach, awarded the China National Petroleum Corporation (CNPC) a $420 million contract to renovate its refinery in Algiers. Part of the contract, awarded on November 6, two days after increased US "secondary" sanctions were imposed on third parties with trade links with Iran, was for Huawei to provide telecommunications services. Neither Algeria, which maintains friendly relations with Iran, nor CNPC will take kindly to their citizens involved in the deal being arrested and extradited by third parties on flimsy US arrest warrants executed by officials in Washington taking their orders from pro-Israeli influence wielders.

Israel and the Trump administration are also exerting pressure on Ethiopia. They are warning EthioTelecom not to award a lucrative cellular network expansion project to Huawei. Another nation worried about the Trump administration's intentions is the West African nation of Benin. Huawei is installing a fiber-optics network in Benin, which is guaranteed by a $80 million financial assistance package from the Chinese Eximbank. Trump administration officials have also warned South Korea away from a prospective contract for Huawei to install a broadband wireless network in the country.

The arrest of Meng over an issue dealing with Chinese-Iranian economic ties is similar to the 2010 arrest in Liberia of Russian pilot Konstantin Yaroshenko. Extradited by Liberia to New York, Yaroshenko was charged with smuggling cocaine throughout South America, Africa, and Europe. The drugs, however, never crossed American shores. The statements of the Russian Foreign Ministry in 2010 were similar to those from the Chinese Foreign Ministry now. The Foreign Ministry in Moscow stated: "We're talking about a kidnapping of a Russian national from a third country. The actions of US special services in the forcible and secret relocation of our national from Monrovia to New York could only [be] seen as open lawlessness."

In 2015, Dino Bouterse, the son of Surinam's president, Desi Bouterse, was sentenced by a US judge in New York to 16-1/4 years in prison for his dealings with the Lebanese Shi'a group, Hezbollah. Dino Bouterse was charged with aiding a "terrorist" group. However, Hezbollah is a legal political party in Lebanon and has supported various coalition governments in that country. The case was only brought because, once again, Israel's antagonism against Iran influenced the US legal system in extraterritorially extending US law to Suriname's relationship with Lebanon.

Related Topic(s): American Empire; American Exceptionalism; American Foreign Policy; American Hypocrisy; Arrest; Citizens; Extradition; Government; International; Justice; (more...) Law; Security, Add Tags  (less...)
Add to My Group(s)
Go To Commenting
The views expressed herein are the sole responsibility of the author and do not necessarily reflect those of this website or its editors.