It is possible to protect the rights of the complainants in Sweden and Assange's rights against political persecution, but a vindictive thirst for vengeance is preventing that. 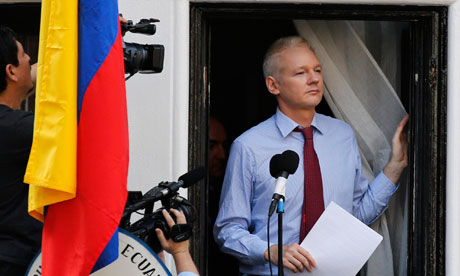 Earlier this week, British lawyer and legal correspondent for the New Statesman David Allen Green generated a fair amount of attention by announcing that he would use his objective legal expertise to bust what he called "legal myths about the Assange extradition." These myths, he said, are being irresponsibly spread by Assange defenders and "are like 'zombie facts' which stagger on even when shot down."

In addition to his other credentials, Green -- like virtually the entire British press -- is a long-time and deeply devoted Assange-basher, and his purported myth-busting was predictably regurgitated by those who reflexively grasp onto anything that reflects poorly on western establishmentarians' public enemy No1. It's really worth examining what Green argued to understand the behavior in which Assange detractors engage to advance this collective vendetta, and also to see how frequently blatant ideological agendas masquerade as high-minded, objective legal expertise.

But before getting to that, let us pause to reflect on a truly amazing and revealing fact, one that calls for formal study in several academic fields of discipline. Is it not remarkable that one of the very few individuals over the past decade to risk his welfare, liberty and even life to meaningfully challenge the secrecy regime on which the American national security state (and those of its obedient allies) depends just so happens to have become -- long before he sought asylum from Ecuador -- the most intensely and personally despised figure among the American and British media class and the British "liberal" intelligentsia?

In 2008 -- two years before the release of the "collateral murder" video, the Iraq and Afghanistan war logs, and the diplomatic cables -- the Pentagon prepared a secret report which proclaimed WikiLeaks to be an enemy of the state and plotted ways to destroy its credibility and reputation. But in a stroke of amazing luck, Pentagon operatives never needed to do any of that, because the establishment media in the US and Britain harbor at least as much intense personal loathing for the group's founder as the US government does, and eagerly took the lead in targeting him. Many people like to posit the US national security state and western media outlets as adversarial forces, but here -- as is so often the case -- they have so harmoniously joined in common cause.

Related Topic(s): Extradition; Julian Assange; Media; Media Bias; Media Complicity; Rape; Wikileaks, Add Tags
Add to My Group(s)
Go To Commenting
The views expressed herein are the sole responsibility of the author and do not necessarily reflect those of this website or its editors.