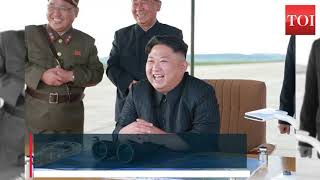 The envoys said, "The North Korean side clearly stated its willingness to denuclearize. It made clear that it would have no reason to keep nuclear weapons if the military threat to the North was eliminated and its security guaranteed."

Kim also told the envoys he "would suspend all nuclear and missile tests while engaged in talks." [1]

Could this be the diplomacy that finally breaks the impasse between Kim and Trump and gets the "Donald" to bring the US to the negotiating table and end his juvenile standoff with Kim?

Understandably, the sticking point has been the North's insistence there be no pre-conditions to talks. But the US has insisted before talks can begin the North must first commit to denuclearize.

What's clear the North is never going to give up its nuclear weapons unless the US agrees to guarantee it will not attack the North and its regime remains in place. The North's nuclear arsenal is THE deterrent that's prevented the US from attacking the regime.

Let's face it the North developed nuclear weapons only after seeing the US invade Saddam Hussein's non- nuclear Iraq in 2003.

Meanwhile US intransigence has been at the heart of the standoff with North Korea since that war between 1950-53.

How many people in the US realize this? I'd guess very few.

The bugaboo early on was in the "Red scare" 1950's with Communism the "enemy" that had to be resisted everywhere else it would destroy America. And North Korea being Communist it too must be resisted else it would swallow up the entire Korean Peninsula.

Truth be told North Korea never posed any threat to the US or its interests.

Even today, the idea of North Korea posing a threat, imminent or otherwise to the US or its interests, because of its nuclear weapons, is a fantasy.

North Korea isn't going to initiate an attack on the South, Japan, Guam or anywhere else knowing if it did the US would bring its total annihilation.

Retired. The author of "DECEIT AND EXCESS IN AMERICA, HOW THE MONEYED INTERESTS HAVE STOLEN AMERICA AND HOW WE CAN GET IT BACK", Authorhouse, 2009
Related Topic(s): North Korea; North Korea And South Korea Talks, Add Tags
Add to My Group(s)
Go To Commenting
The views expressed herein are the sole responsibility of the author and do not necessarily reflect those of this website or its editors.