What the U.S., Iraq, the U.N., and the EU can do to help the ethnic minority return to their homeland in Iraq 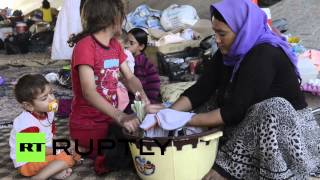 Iraq: These Yazidis who fled IS are living under a bridge now
(Image by YouTube, Channel: Ruptly)   Details   DMCA

The genocide of the Yazidis in northern Iraq's Sinjar District will be remembered as one of the darkest chapters in the rise and "fall" of ISIS. It is hard to fathom the pain, suffering, and losses the Yazidis have endured. Five years after the genocide, the community remains shattered and deserted. Most of its homes and farmland were destroyed. The number of boys and men who were summarily slaughtered is estimated at 7,000 to 10,000, and nearly 400,000 Yazidis continue to languish in camps. Thousands, including women and children, suffer from complex post-traumatic stress disorder (CPTSD). Thousands of women were raped, many repeatedly, while thousands of others were sold as sex slaves. The many thousands who have been injured are still in desperate need of medical treatment. Alas, there seems to be no end in sight to the Yazidis' unfolding crisis, as they are now living in extreme anxiety and fear, not knowing what tomorrow will bring.

Many individuals and a few countries have made efforts to alleviate the suffering of the Yazidis. A Yazidi who lived in Iraq and was an interpreter for the U.S. Army in Iraq co-founded Yazda, a U.S. nongovernmental organization that supports the Yazidi community. A group of Israelis, led by Ari Zivotofsky and Yaakov Hoffman, with the support of Bar Ilan University, brought 16 women to Israel for training on how to treat women back home who suffer from CPTSD. Nadia Murad, a Yazidi woman who co-won the Nobel Peace Prize, continues to work relentlessly to bring the plight of her people to the attention of the international community.

Germany provided invaluable assistance by accepting more than 1,100 women and children who had been rescued, and in Armenia, another country that understands the meaning of genocide, some 50,000 Yazidis found a second homeland. They recently opened Quba Mere Diwane, the largest Yazidi temple in the world, in Aknalich, Armenia. Yazidis are represented in the Armenian parliament. Canada has also helped, offering itself as a haven for Yazidi women and girls since 2017. At least 1,200 have been resettled as of June 2019.

Causes of the Persecution

The goodwill and the efforts of these countries and concerned individuals have been great, but they have fallen short because of the enormous magnitude of the humanitarian crisis facing the Yazidis. Amnesty International found clear evidence that ISIS targeted the rural environment that supports the people who live off the land. The Yazidis now face new threats caused by four interrelated developments, which are making their repatriation and rehabilitation extremely challenging.

First, the precipitous withdrawal of American troops from Syria has created a vacuum that Turkey, Russia, and Iran have been quick to fill. Despite President Trump's claim that ISIS was "100 percent defeated," the Pentagon in a report in August said that the group "solidified its insurgent capabilities in Iraq and was resurging in Syria." The pullout of U.S. troops has already had devastating consequences for all minority groups, especially the Kurds, Yazidis, and Christians.

Second, Trump's ill-fated withdrawal of U.S. forces invited Turkey to invade Syria and invasion that Ankara was preparing for these past two years. There was never any love lost between the Turks and the Yazidis. The tension goes back to the Ottoman Empire. In 1915, entire Yazidi villages were wiped out; thousands were killed and many more displaced. When Turkey took control of the Afrin region in Syria, Turkish soldiers and proxy fighters in Syria were engaged in ethnic cleansing; they rained havoc on Yazidi temples, and many Yazidis were expelled from the areas. What makes matter worse is the fact that owing to ISIS's deliberate targeting of agriculture, on which the Yazidis were wholly dependent for both their main food source and main source of income, no Yazidis who depend on agriculture live in Sinjar in northern Iraq any longer.

Amnesty International reports that the area around Sinjar suffered some of the worst destruction: "Irrigation wells ... were often sabotaged with rubble, oil, or other foreign objects. Blockage was often accompanied by theft and/or destruction of the pump, cables, generators and transformers. IS[IS] also burnt or chopped down orchards and pulled down and stole vital electricity lines."

Related Topic(s): Agriculture; Children; Crisis; Genocide; Iraq; Moral Panic; PTSD; Security; Women; Yazidis, Add Tags
Add to My Group(s)
Go To Commenting
The views expressed herein are the sole responsibility of the author and do not necessarily reflect those of this website or its editors.