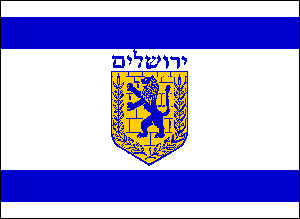 Flag of Jerusalem
(Image by (Not Known) Wikipedia (commons.wikimedia.org), Author: Author Not Given)   Details   Source   DMCA
Trump's 90-day ban on travel to the USA from seven Islamic countries caused a raucous disturbance around the world which hasn't subsided yet despite the subsequent judicial revocation which may be only temporary.

Moving the US embassy to Jerusalem as proposed by Trump and Netanyahu could cause an even more widespread and violent reaction, since the PLO claims East Jerusalem for its proposed capital. The very suggestion of such a move in this very unstable era of world politics reveals a total incompetence and lack of understanding of the political realities involved. Trump's take-charge method regardless of consequences could bring about repercussions that only a totally un- or mis-informed person could not anticipate.

Trump's stated goal in issuing the travel ban was part of his plan to "keep America safe". The move of the embassy to Jerusalem would do just the opposite. Like the unresolved truce of the Korean war, the boundaries of Israel and the status of Jerusalem as its legal capital have not been established, pending the two-state solution. The embassy move would be a "fait accompli", in defiance of the Camp David and Oslo treaties and resolutions of the United Nations that validated the establishment of Israel. It would re-ignite and intensify hostilities with the PLO and its supporters and could drag America more deeply into that hornet's nest. It appears that Trump and Netanyahu are scheming to take advantage of the present turmoil and distractions among Arab states. However, we have seen that the various extremists in this saga have found ways to expand their field of action beyond all expectations.

Israel exists in tentative security only by maintaining a formidable military and sealing its critical borders with walls. It functions like a medieval fortress in hostile territory. The embassy move would put it in higher alert and peril, making peace a more futile hope. The disputed expansion of settlements in the West Bank under military occupation is the other main point of contention, aside from those who want to eliminate Israel altogether.

In view of the length of hostilities between Israel and Palestinians - something on the order of the Hundred Years and Thirty-Years wars of the 14th and 17th Centuries - and the repercussions upon the rest of the world, it would be sensible and appropriate to 21st Century political concepts to create a world forum - if not the UN - that would impose a rational and just final solution. The present right-wing Israeli government may believe that it can wait out the impasse indefinitely, but a strong liberal minority is willing to make real concessions - and the world is impatient. It would be to both parties' advantage - and the world's - to settle this dilemma once and for all.

What might a final solution look like? If we can step back from the current intransigence of both parties, we might get a better perspective. The following is a little refresher background, courtesy mainly of Wikipedia

The main point of contention may be who "owns" or belongs on the land known as Palestine before the creation of Israel? Biblical history places Hebrew tribes, followers of the Jewish religion, as the dominant people in the region around 1000 BC. During the following millennium of invasions and conquests, most Jews were dispersed to Babylon (modern Iraq), which remained a principal center of Jewish life, thriving up to the 13th Century, as in Spain under the Muslims.

Jewish religious traditions were preserved throughout the diaspora, based on their common history and teachings. Returning to Israel after more than 2000 years of exile is a primary theme in Jewish tradition, as expressed in the prayer translated as "Next year in Jerusalem", although I suspect few mouthing the prayer actually had that intention until Arab countries expelled the Jews after the birth of Israel.

The Zionist movement was established in 1897 to create a homeland in Palestine based on ancient tradition, as a refuge for Jews, mainly from Eastern Europe, who were persecuted over the centuries. The immigrants acquired land by purchase to form agriculture communes. As numbers of Jewish settlers increased twenty-five times by 1931, hostilities arose between them and native Palestinians.

England, which controlled Palestine as a Mandate after WW1, was entreated to issue the Balfour Declaration of 1917, favoring the establishment of a Jewish state in Palestine without restricting any rights of non-Jews. In 1948 after WW2, the UN approved the establishment of the State of Israel, against the objections of surrounding Arab states. This action can be seen as an emotional response to the tragedy of the Jewish holocaust, perhaps as compensation for centuries of persecution in many European states, and a solution to the immediate crisis of mass Jewish refugees. For the Palestinians, the land was stolen. For the Jews, their 2000-year old prayer was fulfilled.They were entitled to their promised land.

On the basis of ownership of the land, both claims are ineffective, according to present-day vague standards of diplomatic ethics. The political map of the world has changed countless times during the millennia. History is the story of mass migrations and displacements of people to other parts of the world. The justice of these movements has seldom, if ever, been established, even when wars and genocide were involved. Israel was created by an act of the UN, followed by an act of war - not by an act of god for a chosen people. No one but the most archaic minded would hold that view today. The claim of historical or religious destiny in the creation of Israel is about as valid as the claim of the new caliphate of ISIS, based upon territorial dominion after the Islamic expansion of the Middle Ages.

In terms of negotiable assets, Israel seems to hold most of the cards. Aside from its military strength, it has created a virtual miracle of a prosperous modern state with thriving industry and agriculture out of an undeveloped backward region. In addition, it has constructed a state-of-the-art water supply system that could benefit its neighbors as it has helped other countries.* Countering that is the costly constant threat to its peace and existence from a Palestinian Intifada supported by surrounding countries hostile to its existence.

Perhaps more important than those factors in a possible peace settlement is the biblical legacy that Jews, as the first believers in one God, are the chosen people to teach others of this concept and all that it entails. Whether or not one believes this literally - or even believes in god - the tradition has persisted historically in the Jewish people and manifested itself throughout centuries of persecution, poverty and isolation in ghettos where survival depended upon helping each other. When freed from the ghettos after centuries, their survival skills allowed them to join the world, prosper, and contribute generously and creatively to their new societies. The Dalai Lama has consulted with Jewish groups representing this tradition to learn these survival skills for his people.

It is incongruous with this survival tradition that the Jews, who suffered so greatly through the Nazi era, should not empathize with the suffering of the Palestinian people and offer help to raise them up, rather than further antagonize them - even when their own kind do not. Why not give them some of the new settlements? I am certain that many Jews believe something like this.

Related Topic(s): Jerusalem; Jerusalem; Palestinian; Survival, Add Tags
Add to My Group(s)
Go To Commenting
The views expressed herein are the sole responsibility of the author and do not necessarily reflect those of this website or its editors.