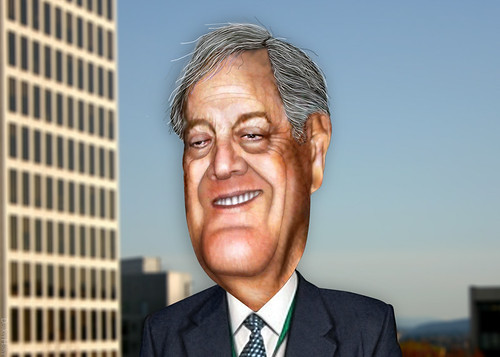 Well hot damn, we've lost a Koch brother! Do your happy dance, call out the munchkins and let your voice shake the heavens with a rousing rendition of "Ding-dong the oligarch is dead!"

David Koch, the younger of the two plutocratic faux-libertarian powerhouses who were until today collectively known as the Koch brothers, has died at 79. If you find my celebration of this distasteful, you can kindly kiss my bogan ass. Every time a toxic oligarchic death cultist dies there are always a bunch of people buzzing around social media and the blogosphere admonishing everyone to be respectful and polite because blah blah something about having a family. Such calls for civility toward our rulers are always anti-populist in nature; they stem from a fear of what would happen if the unwashed masses lost their reverence for the ruling class, and I have no respect for them. The less reverence we have for these creeps, the better.

And the narrative managers have of course been shoving us as hard as they can in the opposite direction toward reverence and adulation, with the word "philanthropist" filling out headlines for mass media outlets like Fox News, NBC and CBS. The New York Times published a fawning hagiograph y with the subheader "A man-about-town philanthropist, he and his brother Charles ran a business colossus while furthering a libertarian agenda that reshaped American politics."

Now, calling American Enterprise Institute council member and virulent Mitt Romney stan David Koch a "libertarian" is ridiculous; he was as much a libertarian as Hillary Clinton is a socialist. The Kochs have always paid lip service to shrinking government, but all they've ever pushed for with their actions is the shrinking of the aspects of government which inconvenience the oligarchs: taxes and regulations. They've left the mechanisms of bloodthirsty imperialism, Orwellian surveillance and oppressive neoliberalism almost entirely unchallenged; they're neoliberal centrists wrapped in a fake libertarian bow. But far more offensive to common sense and human dignity is labeling him a "philanthropist". 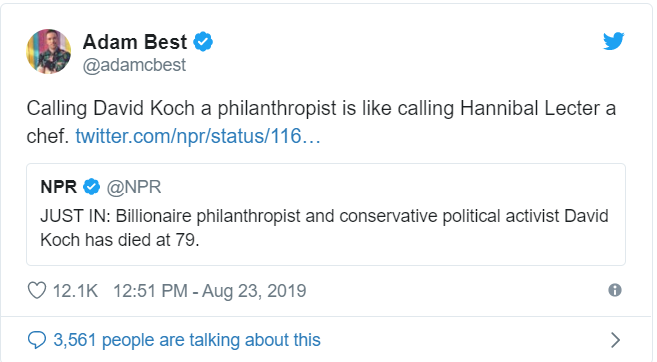 If I could strike one word from the English language, "philanthropist" would be it. That word's sole meaning these days is a label that gets attached to parasitic plutocrats who donate a very small percentage of their wealth to tax-exempt charities so that people won't notice they're living in a plutocracy and roll out the guillotines.

Any adept socializer knows that it doesn't take much to get on someone's good side; a little well-placed flattery at a party one night and you've earned a defender and supporter for life. In the same way, a casual look through campaign donations from the plutocratic class on Open Secrets will show you that it doesn't take much to get a politician on the side of your interests; a few thousands dollars here, a few thousand there, and you've bought yourself a congressman. People respond to positive reinforcement, and it takes very little to elicit this response. Plutocratic charity donations follow the same principle; a billionaire who sprinkles a tiny percentage of his income around a few of his favorite causes will earn the title of "philanthropist" for life.

And when I say tiny, I mean tiny. Study after study has found that the wealthy give less to charity than those who make orders of magnitude less money than they do, which should surprise no one since study after study has also found that wealth kills empathy and makes people more sociopathic. Yet you'll never see any member of the middle or lower class eulogized as a philanthropist, even if they give a much larger percentage of their income to charity than David Koch did.

Even when they do give money to charity, the wealthy need to have those donations solicited in the most egoically appealing way possible before they'll deign to consider them. In an interview with Creative Mornings, author Anand Giridharadas described what he learned from disgraced philanthropy fundraiser Emmett Carson about how much bowing and scraping and conceptual re-framing that people have to do in order to convince a billionaire to part with a few coins:

Related Topic(s): David Koch, Add Tags
Add to My Group(s)
Go To Commenting
The views expressed herein are the sole responsibility of the author and do not necessarily reflect those of this website or its editors.