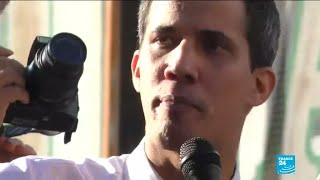 Government forces foiled the US-orchestrated scheme to try forcing Trojan horse "humanitarian aid" cross border into Venezuela a PR stunt unrelated to helping its people the Trump regime is waging war on by other means.

A previous article called the self-styled newspaper of record NYT a press agent for US-designated Venezuelan puppet/usurper in waiting Juan Guaido, a traitor to his country, guilty of sedition and/or treason, belonging in prison for crimes against the state.

Like other Western media, the Times backs him, ignoring his illegitimacy and high crimes. They support US war on Venezuela by other means likely to intensify in the aftermath of Saturday's PR stunt.

The Times report on what happened was a litany of bald-faced Big Lies and deception ignoring Maduro's legitimacy as Venezuela's democratically elected and reelected president.

Claiming Guaido has "international support," the Times failed to explain its from US colonized countries -- not independent ones -- and others rejecting the Trump regime's hostility toward a sovereign state.

Claiming "aid...is desperately needed in Venezuela," the Times was silent about US economic, financial and sanctions war, begun by Obama, escalated by Trump, responsible for tens of billions of dollars lost to the country largely responsible for dire conditions, exacerbated by low oil prices.

The Times lied claiming "hunger is endemic." A previous article exposed the Big Lie about empty grocery shelves in Venezuela, the Times promoting the deception.

Mike Pence and Trump's envoy for regime change in Venezuela, Elliott Abrams, are in Colombia, Guaido is to meet with them in Bogota on Monday, plotting their next dirty tricks, surely to include stiffer illegal sanctions.

Related Topic(s): Chaos; Media; Media Bias; Venezuelan Coup; Western Imperialism, Add Tags
Add to My Group(s)
Go To Commenting
The views expressed herein are the sole responsibility of the author and do not necessarily reflect those of this website or its editors.