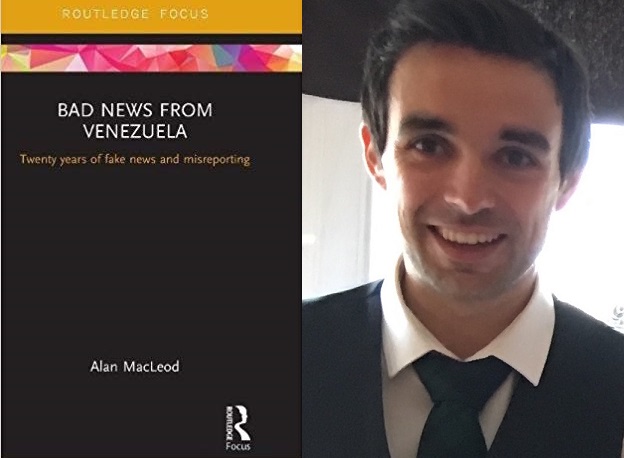 Slava Zilber: [You are] a member of the Glasgow Media Group. In 2017, you have completed your doctoral thesis in sociology at the University of Glasgow and it has been published this year: "Bad News from Venezuela. 20 Years of Fake News and Misreporting," Routledge. And this year, you have been working on another project. It is called "Still Manufacturing Consent. The Propaganda Model in the Information Age," to come out in 2019. You are also a contributor to FAIR, Fairness and Accuracy in Reporting. And some of your interests are media as well as Latin American politics. You have focused on Russiagate, how this narrative is being used, and the internet censorship campaign with Facebook, Google, Atlantic Council. Furthermore, you have devoted your attention to Venezuela, the situation there and the media coverage. Could you please explain how you became interested in the media, media criticism, and in Latin America, specifically Venezuela.

Alan MacLeod: I've always thought that the media are extremely powerful and I think they have such power over society to decide what is real and what is fake and what people think about. And I think there is arguably no greater force shaping society today than the mainstream media. And so, therefore, it is crucial we really look at them.

I am personally not from the elite of the UK. I never really felt like I understood the media or politics and sometimes I felt people were speaking a different language to me. I just couldn't understand what they were talking about. I also wondered why certain things like poverty and starvation were never discussed in the media while other subjects got so much attention put to them that it was unreal. And during my master's thesis, I came across the book "Manufacturing Consent" by Herman and Chomsky. And it really opened my eyes as to how the media function. And so Herman and Chomsky's ideas opened up a wide range of other authors and avenues of research like critics of politics, economics and the system in general. So that's why I have always come back to the media because that was my avenue into really thinking about the world.

And one of the things I was interested in was looking at systems of government which are different to ours. So I did my master's on the Soviet Union. And I came to be quite interested in Venezuela like so many other people because there's been such a great increase in interest in Venezuela since the election of Hugo Chavez in 1998. And what I found was: There were a few journalists, who were talking about it, that said that this was a really interesting, vibrant democratic experiment. But there were many, many more that said 'this is a total dictatorship, run by a tyrant and we have to do something about this.' And so that really got me interested. What is going on here?

So I did. I went to organisations like the United Nations to have a look at the data and find: Actually there was something incredible going on, that almost the entire media was presenting a country in a way that was diametrically opposed to what you would have imagined if you just looked at the data from the United Nations or the World Bank or anything like that. And that was my entry into Venezuela.

I would like to talk to you about your first book "Bad News from Venezuela." You are based at the University of Glasgow. You were there when you worked on it. And in 1974, the Glasgow Media Group was founded with several academics, Brian Winston, Greg Philo, John Eldridge. They have since published numerous books. I realized that "Bad News from Venezuela" is following on "Bad News," 1976, and then "Bad News from Israel," "Bad News [for] Refugees." Was it intentional? And could you please explain what their methodology is? As far as I see they have focused on television news analysis. And you write that in your thesis you have used the Glasgow Media Group's 'thematic analysis technique.' What is it? How do you see yourself in the context of this group?

Alan MacLeod: Yes, the media group pioneered a methodology called 'thematic analysis' which I found was very useful for looking at controversial subjects in the media. And so how it works is: On any controversial topic we posit that there is going to be a number of competing explanations and arguments. And so what we do first is: We look at all the arguments. So we go to left-wing sources, right-wing sources, foreign sources. We look at what organizations like the United Nations or the World Bank would say on an issue, what certain professors would say, what certain political parties would say about it. And then we produce what is called 'a conceptional map' to the reader, which is just laying out all the different arguments and explanations for a certain phenomenon that is going on. And so then we go to the media and then we take a random sample of the media. And we just look to see how often certain arguments are presented, how often certain arguments are ignored as well. And so that can tell you a great deal about what the media's agenda is, if certain arguments and certain sources are constantly used to describe a phenomenon or an issue and then other arguments are left to the side. And so that's the methodology.

We have been using it for 35 years now or more at the media group. And so my book is very much in that tradition. We used it, for instance, in very controversial subjects like the Israel/Palestine issue and we found that the media and the government in this country were consistently repeating talking points from the Israeli government and ignoring the talking points and the arguments from the Palestinians.

And that's what I did with Venezuela. I find that minority opinions on extremely controversial subjects were being passed off as objective, unbiased and not contested facts. Whereas, in fact, what was going on was, that there was a very rich argument and ideological struggle between the two different sides in Venezuela, but what was being produced by the media was trying to pass off opposition propaganda as factual news. And so that's what the book is about.

And I also interviewed 27 journalists and academics who were involved in making the news because I wanted to describe and understand why this was going on. And what I found was: Many journalists see themselves as 'the resistance' to the government. And they live inside and work inside very, highly ideological newsrooms which see their job as to resist the government. Journalists from the West are parachuted into Venezuela. They live inside a very, deeply segregated city along class and race lines. And so they live in gated compounds with armed guards. And so they don't really interact with the majority of Venezuelans very often. They are living in socially constructed bubbles. And this comes out in the reporting. And they constantly report what the elite view of Venezuela is and ignore what the working class or the majority view of the country is.

I remember watching the movie "Manufacturing Consent" about Prof. Herman's and Prof. Chomsky's work. And the makers talked to a New York Times editor, I believe. And he (editor) was amazed at what the propaganda model was saying and he said that it must be a mistake. And he presented it as if they were just doing their job, they were just working. You said that these people saw themselves as part of a resistance. I thought that they would tell you that they are just not ideological, they don't have an agenda. They just came out and said it. And did you also talk to people writing for the New York Times? What were your impression[s] there?

Well, when it comes to Venezuela, there has actually been so many cuts to the modern media that there are only a very few journalists who actually cover Venezuela for the entire western media. And so we are talking about perhaps two dozen people, maybe 24 or 30 people, who write the majority of the content for all of the western news. And that's because so much of it has been passed on to agencies like Reuters or Bloomberg or Agence France-Presse. And those stories are picked up around the world, in so many newspapers, so many media in Europe, in Asia, in North America, etc. So there's not many of them, to start with.

But yes! A lot of the journalists I spoke to weren't even aware that their work was controversial. They saw themselves as living in a dictatorship and it was their democratic duty to tell the truth. So they possibly saw themselves a bit like crusading citizen journalists in Egypt during the Arab Spring, for instance.

Related Topic(s): Journalists-Journalism; Venezuela Coup; Venezuelan Coup, Add Tags
Add to My Group(s)
Go To Commenting
The views expressed herein are the sole responsibility of the author and do not necessarily reflect those of this website or its editors.