In late December 2006, my youngest daughter and I were in the Swabian village of Wernau-am-Neckar before setting out on our camino to Santiago de Compostela. After the war - and almost up to the time of his death - my late father taught metallurgy and aero-dynamics at the University of Applied Sciences, in nearby Esslingen. The village was a convenient commute to work. He sold the family home in Berlin, built a residence overlooking the village and - characteristic of Europeans generally - never moved again.

We had all been in Wernau just a month earlier, entirely unexpectedly, to attend the burial of my brother Rainer - ten years my junior - who sickened very quickly and died of septicemia following the botched repair of a torn Achilles tendon.

Now, two of us were back. It was all Stefanie's doing. She had nagged me unmercifully for years to be a personal interpreter on a visit to her Oma Ruth, my stepmother. There had been no social opportunity in the days surrounding my brother's funeral. Now, we had returned to spend Christmas in Germany with her Oma prior to backpacking across northern Spain. Why it was my responsibility to satisfy this cross-cultural plea I never figured out, but persistent children will have their way. And Stefanie is a paradigm of persistence. She peppered her grandmother with questions. I made instant translations when needed.

It was the first and last time the two of them would converse with such intensity, the old white-haired lady in her 90s who glided capably and gracefully from English to French to German, and the brash young Jewish-American undergraduate curious about her familial roots.

Early on the day of our flight to Madrid we staged in the foyer and checked the contents of the rucksacks we would have to carry in deep winter across the cordillera of northern Spain. Ruth joined us. She held Rainer's confirmation candle. It was a richly decorated example, thick as a man's forearm, massive, gussied up with motifs in bas relief and polychromed. Heavy. This thing had gravitas in abundance and was in every way a fit symbol for the rite of Christian affirmation.

Would we carry the candle to Santiago de Compostela and leave it there in the cathedral, she asked? We had been given a quest. In medieval chivalry, a boon. We accepted at once.

Overnight from Madrid's cavernous Chamartin terminal in a train cabin furnished with a sink, double bunk and the narrowest shower imaginable (but no bathroom). Off in Lugo at dawn, thence a taxi to our starting point in the mountaintop village of O Cebreiro, 100 or so miles from our objective to ensure the minimum distance of 100 km on foot to qualify for the compostela, testimonial proof of a completed pilgrimage. Deep snow in the high cordillera leading to emerald green as the mountains gave way to the sea at Finesterre, the End of the Earth where the stars fell into the sea.

No refugios for me. Thirty years of military life left no residual charms for communal living. Zero interest in cooking my own dinner, or dragooning my daughter into doing the job. We put in at small hotels at day's end in what quickly evolved into the trek of a lifetime. Bodegas filled my brandy flask. No charge. Stefanie carried a water camel. We traded spigots, discovered boiled pulpo (octopus tentacles) dipped in olive oil served on wooden plates with home-made loaves of crusty bread. Dinners came with wine that did not produce a buzz.

On the last day, after taking a wrong turn in the opposite direction, we back-tracked sharpish to arrive in the city exactly at noon as the tower bells rang out the Pilgrim's Mass, and just as the cathedral's fabled silver botafumeiro - a censer big as a Buick V-8 engine - was being hoisted to the ceiling. 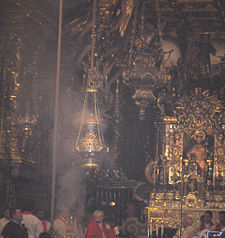 On arrival we registered with cathedral authorities who examined our credencial with its multitude of rubber stamps collected on the way in hotels and restaurants to prove the length of our journey, and got into the pews in time to hear the priest recognize all arriving pilgrims: "And from America, a father and his daughter." Then the botafumeiro started its mighty arc to the distant ceiling. A standing-room only congregation gasped in wonder and delight.

After Mass, we told our Rainer confirmation candle story to one of the nuns-the cathedral's sacristan and cantor, as it happened-and asked if we could light the wick somewhere inside the cathedral, and leave it there.

Related Topic(s): Daughter; Faith; Family; Heart; Living; Mountains; Personal; Spanish; Story; Time, Add Tags
Add to My Group(s)
Go To Commenting
The views expressed herein are the sole responsibility of the author and do not necessarily reflect those of this website or its editors.