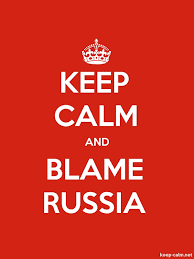 Is it war yet?

Yes, in too many respects.

It's a relentless economic, diplomatic, and ideological war, spiced with (so far) just a dash of military war, and the strong scent of more to come.

I mean war with Russia, of course, although Russia is the point target for a constellation of emerging adversaries the US is desperate to entame before any one or combination of them becomes too strong to defeat. These include countries like Iran and China, which are developing forces capable of resisting American military aggression against their own territory and on a regional level, and have shown quite too much uppitiness about staying in their previously-assigned geopolitical cages.

Is it, then, a new Cold War, even more dangerous than the old one, as Stephen F. Cohen says ?

That terminology was apt even a few months ago, but the speed, ferocity, and coordination of the West/NATO's reaction to the alleged nerve-agent poisoning of the Skripals, as well as the formation of a War Cabinet in Washington, indicates to me that we've moved to another level of aggression.

Related Topic(s): Russia; Russiagate; Russiagate; Sergei Skripal; Skripal; Skripal Poisoning; Us Warmongering; War Propaganda; War With Russia, Add Tags
Add to My Group(s)
Go To Commenting
The views expressed herein are the sole responsibility of the author and do not necessarily reflect those of this website or its editors.