As documented in Douglas Blackmon's book, Slavery By Another Name: The Re-Enslavement of Black Americans from the Civil War to World War II, the institution of slavery in the U.S. South largely ended for as long as 20 years in some places upon completion of the U.S. civil war. And then it was back again, in a slightly different form, widespread, controlling, publicly known and accepted -- right up to World War II. In fact, in other forms, it remains today. But it does not remain today in the overpowering form that prevented a civil rights movement for nearly a century. It exists today in ways that we are free to oppose and resist, and we fail to do so only to our own shame.

During widely publicized trials of slave owners for the crime of slavery in 1903 -- trials that did virtually nothing to end the pervasive practice -- the Montgomery Advertiser editorialized: "Forgiveness is a Christian virtue and forgetfulness is often a relief, but some of us will never forgive nor forget the damnable and brutal excesses that were committed all over the South by negroes and their white allies, many of whom were federal officials, against whose acts our people were practically powerless."

This was a publicly acceptable position in Alabama in 1903: slavery should be tolerated because of the evils committed by the North during the war and during the occupation that followed. It's worth considering whether slavery might have ended more quickly had it been ended without a war. To say that is not, of course, to assert that in reality the pre-war United States was radically different than it was, that slave owners were willing to sell out, or that either side was open to a non-violent solution. But most nations that ended slavery did so without a civil war. Some did it in the way that Washington, D.C., did it, through compensated emancipation.

Had the United States ended slavery without the war and without division, it would have been, by definition, a very different and less violent place. But, beyond that, it would have avoided the bitter war resentment that has yet to die down. Ending racism would have been a very lengthy process, regardless. But it might have been given a head start rather than having one arm tied behind our backs. Our stubborn refusal to recognize the U.S. civil war as a hindrance to freedom rather than the path to it, allows us to devastate places like Iraq and then marvel at the duration of the resulting animosity.

Wars acquire new victims for many years after they end, even if all the cluster bombs are picked up. Just try to imagine the justifications that would be made for Israel's attacks on Palestinians had World War II not happened.

Had the Northern U.S. allowed the South to secede, ended the returning of "fugitive slaves," and used diplomatic and economic means to urge the South to abolish slavery, it seems reasonable to suppose that slavery might have lasted in the South beyond 1865, but very likely not until 1945. To say this is, once again, not to imagine that it actually happened, or that there weren't Northerners who wanted it to happen and who really didn't care about the fate of enslaved African Americans. It is just to put into proper context the traditional defense of the civil war as having murdered hundreds of thousands of people on both sides in order to accomplish the greater good of ending slavery. Slavery did not end.

Across most of the South, a system of petty, even meaningless, crimes, such as "vagrancy," created the threat of arrest for any black person. Upon arrest, a black man would be presented with a debt to pay through years of hard labor. The way to protect oneself from being put into one of the hundreds of forced labor camps was to put oneself in debt to and under the protection of a white owner. The 13th Amendment sanctions slavery for convicts, and no statute prohibited slavery until the 1950s. All that was needed for the pretense of legality was the equivalent of today's plea bargain.

Not only did slavery not end. For many thousands it was dramatically worsened. The antebellum slave owner typically had a financial interest in keeping an enslaved person alive and healthy enough to work. A mine or mill that purchased the work of hundreds of convicts had no interest in their futures beyond the term of their sentences. In fact, local governments would replace a convict who died with another, so there was no economic reason not to work them to death. Mortality rates for leased-out convicts in Alabama were as high as 45 percent per year. Some who died in mines were tossed into coke ovens rather than going to the trouble to bury them.

Enslaved Americans after the "ending of slavery" were bought and sold, chained by the ankles and necks at night, whipped to death, waterboarded, and murdered at the discretion of their owners, such as U.S. Steel Corporation which purchased mines near Birmingham where generations of "free" people were worked to death underground.

The threat of that fate hung over every black man not enduring it, as well as the threat of lynching that escalated in the early 20th century along with newly pseudo-scientific justifications for racism. "God ordained the southern white man to teach the lessons of Aryan supremacy," declared Woodrow Wilson's friend Thomas Dixon, author of the book and play The Clansman, which became the film Birth of a Nation.

Five days after the Japanese attack on Pearl Harbor, the U.S. government decided to take prosecuting slavery seriously, to counter possible criticism from Germany or Japan.

Five years after World War II, a group of former Nazis, some of whom had used slave labor in caves in Germany, set up shop in Alabama to work on creating new instruments of death and space travel. They found the people of Alabama extremely forgiving of their past deeds.

Prison labor continues in the United States. Mass incarceration continues as a tool of racial oppression. Slave farm labor continues as well. So does the use of fines and debt to create convicts. And of course, companies that swear they would never do what their earlier versions did, profit from slave labor on distant shores.

But what ended mass-slavery in the United States for good was not the idiotic mass-slaughter of the civil war. It was the nonviolent educational and moral force of the civil rights movement a full century later. 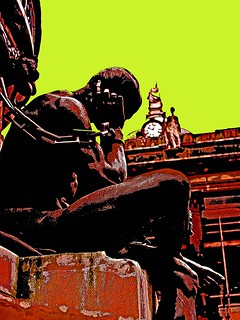 David Swanson is the author of "When the World Outlawed War," "War Is A Lie" and "Daybreak: Undoing the Imperial Presidency and Forming a More Perfect Union." He blogs at http://davidswanson.org and http://warisacrime.org and works for the online (more...)
Related Topic(s): Slavery; Slavery-Forced Labor, Add Tags
Add to My Group(s)
Go To Commenting
The views expressed herein are the sole responsibility of the author and do not necessarily reflect those of this website or its editors.