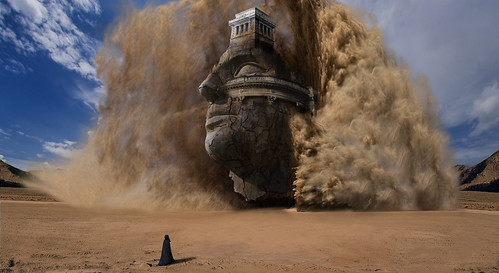 To maintain their worldview in the face of the catastrophes that capitalism and imperialism have created, the world's reactionaries have launched a war against the people who've been forced to migrate in the face of climate change and U.S.-created destabilization. For those who support this war, reality doesn't have to intrude, because the rationale behind the war depends on the perpetuation of an invented reality.

In this alternative reality, Donald Trump is right that there's a "growing security crisis" at the southern border when apprehensions at the border have declined by more than 75 percent since 2000. He's right that the border is a "pipeline" for vast quantities of illegal drugs when the Justice Department has concluded that most drug trafficking on the southern border takes place through courts of entry along the border, showing that a wall would essentially do nothing to stop the drug trade. He was also right to order the army to use chemical weapons against defenseless migrant families last year because of unsubstantiated theories about the migrant caravan being covertly filled with terrorists. Every other narrative that xenophobic politicians like Trump use to demonize immigrants is also accurate in this reality, because it's a reality that exists beyond the realm of human rights laws, facts and statistics, or human empathy.

Embracing a paranoid mentality about the Third World's poor and desperate people is how reactionaries can continue to rationalize their belief that rich white people belong at the top of society's hierarchy. At the core of the white nationalist worldview-and by extension the conservative worldview-is the attitude that those with wealth and privilege deserve what they have, and that marginalized groups, the poor, and the populations that have been subdued by imperialism and colonialism have rightfully lost in the struggle for dominance.

"In conservative thinking, this hierarchy is humanity's natural state," the video essayist Antediluvian Danskin has said about how the right views the inequality that results from capitalism. "The American dream is: here, anyone can make it. No matter who you are or what you start out with, you can become a billionaire. But a necessary component of this is anyone can, but everyone can't.

We're not all gonna be billionaires. There's a finite amount of money in this country. For every one person to have so, so much more money than they need, there must mathematically be thousands of people with less. Your conservative friend is often baffled as to what you're even trying to say when you point out there's not enough high-paying jobs or affordable health plans for everyone."

When the world is supposed to be this Darwinian game where everyone wins or loses according to their merit, the only explanation for the arrival of masses of impoverished people to your country's borders is that they're malicious invaders who want to steal your jobs, destroy your culture, breed out your race, and otherwise exploit your great nation.

The fact that the refugees are coming because the West has destroyed their home countries through imperialist interventions, because corporate pillage has driven countries like Mexico into poverty, and because climate change is making the poorer countries less habitable isn't considered in how reactionaries view these victims of capitalism. The solution that reactionaries have isn't to help the sections of humanity which have been displaced by the forces empire, it's to get rid of the people who they see as human detritus.

The longer the process of racist propaganda campaigns and escalating state violence continues, the more extreme the reactionaries get in their methods for dealing with the immigrants. When the U.S.' immigration crackdown began under Clinton with the passage of "tough on crime" laws that vastly expanded the offenses that could get people deported, the cultural atmosphere around immigration was still relatively mild. With 9/11, the deportation of non-criminal immigrants increased amid the creation of the Department of Homeland Security. Support for this new crackdown was manufactured through the xenophobic and nationalistic ideology behind the War on Terror, an ideology that Trump exploits to the fullest extent.

The explosion of mass migration that's happened since then has resulted in Obama's expansions of the deportations and migrant detentions. This preceded the Trump administration's efforts to make the refugee camps less humane, and to give ICE the authority to massively detain people whether or not they're undocumented.

To see where the process will end, look to Gaza. After the Zionist project has made Gaza into a concentration camp of 1.5 million people where food and water are scarce and poverty is sky high, Israel is handling the messy consequences of its actions by not treating Gazans like human beings.

Israel's shootings of border demonstrators who don't pose a threat, bombings of hovels in Gaza City, calculated murders of Palestinian children, imposition of martial law against Palestinians within the occupied zones, efforts to deprive Gazans of life-saving resources, and apartheid rule against Palestinians within Israel all represent potential parallels to what the other capitalist governments will soon do with their own refugees and poor people.

This trend towards turning the world into Gaza is tied in with capitalism, especially surveillance capitalism. Along with the American corporations that are profiting from the migrant detention centers, the Israeli military contractor Elbit has been installing the same types of surveillance equipment along the U.S. border that it uses to monitor and control Gazans. Elbit's construction of a "virtual wall"-which is supported by House Democrats as a supposedly sensible alternative to Trump's idea for a physical wall-has put entire Native American communities under the watch of surveillance towers that subject everyone in the area to intensive tracking.

Bobby Brown, senior director of Customs and Border Protection at Elbit Systems of America, says that this surveillance network is going to eventually be expanded into a "layer" that encompasses the entire perimeter of the U.S. "Over time, we'll expand not only to the northern border, but to the ports and harbors across the country," Brown said in an interview with The Intercept that was published last month. "There's a lot to be done."

This is the arc of history in the 21st century when it's determined by capitalists like Brown: borders keep closing, military control keeps getting more intensive, and the powerless keep getting subjected to the worst of the crisis.

Related Topic(s): Capitalism; Immigrants; Liberals; Poverty; Propaganda; Surveillance, Add Tags
Add to My Group(s)
Go To Commenting
The views expressed herein are the sole responsibility of the author and do not necessarily reflect those of this website or its editors.