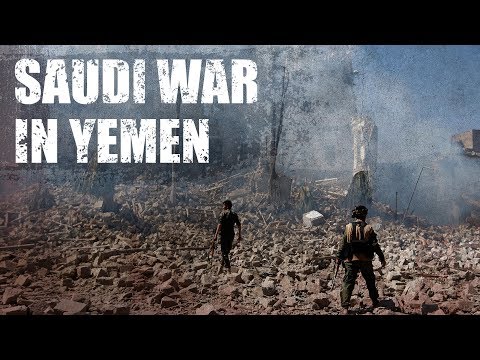 Saudi War in Yemen: The Beginning of the End?
(Image by YouTube, Channel: NewsClickin)   Details   DMCA
The proxy war that Saudi Arabia and Iran have been waging in Yemen for the past five years goes beyond the pale of human capacity for extreme cruelty and ruthlessness, and against the spirit and the letter of the Quran. Ironically, whereas Saudi Arabia has many reasons to end the war, which prompted its decision to declare a unilateral ceasefire, Islam's forbidding of the killing of innocent people was never considered a reason to halt the fighting. The Saudis continued to engage in a merciless war against Iran-backed Houthis, which left Yemen lying in ruin while inflicting unfathomable pain and suffering on millions of innocent men, women, and children. For Saudi Arabia, which leads the Sunni Muslim world, to descend to this level of brutality is a gross violation of Islam and constitutes crimes against humanity.

The war in Yemen has thus far caused more than 100,000 deaths, and out of a population of 30 million, 20 million are in desperate need of food, medicine, and a steady supply of clean drinking water, caused by the more than 6,000 coalition bombing raids that targeted civilian infrastructure. Over two million children are severely malnourished; half of them are infected with cholera and many will perish as there is little or no chance of receiving medical treatment.

The question is why a country so deeply religious and proud of being the birth place of Islam, where Sharia is the law of the land, a country which has assumed the leadership role of Sunni Muslims worldwide, waited five years to declare a ceasefire in an effort to end the world's worst humanitarian crisis since World War II.

Sadly, it is clear that the Saudis are much more concerned with everything except the teachings of the Quran. This includes: a) Saudi Arabia's limited military capabilities; b) tremendous strains the war is putting on the economy; c) the growing lack of financial resources resulting from the plunging price of oil, which is preventing diversification of the economy; d) the significant advances of the Houthis in key provinces in central Yemen; e) the growing international censure against the Saudis; and finally, f) the realization that the war is unwinnable, and that securing the border and distancing the Houthis from Iran assumed priority. Islam's teachings and moral obligations were simply not a part of the equation.

Surah 4:93 warns us "...whoever kills a believer intentionally his recompense is Hell, wherein he will abide eternally, and Allah has become angry with him and has cursed him and has prepared for him a great punishment." Ignoring a core tenet of the Quran is not merely blasphemy but is an outright defiance of religion itself, which the Saudis have flagrantly violated and use as a tool to cover their crimes against humanity.

Instead of taking the lead and mitigating all civil wars in Muslim-majority countries (including Afghanistan, Turkey, Somalia, Sudan, Pakistan, Syria, Libya and Yemen, which represent 61% of all civil wars currently taking place globally) and stop the killing of Muslims by Muslims, Saudi Arabia was leading the foray. It has wantonly and persistently waged a merciless war in conjunction with the US and Britain, who in particular are providing the killing machines that allow the Saudis to slaughter tens of thousands of Yemeni civilians.

Moreover, rather than facilitating the delivery of food and medicine to the multitude of beleaguered Yemenis who are on the verge of dying from starvation and decease, the Saudis violated another Quranic instruction to aid those who are in need (Surah 9:60, "...for the poor and for the needy"). Surah 41:7 states "Those who do not give Zakah, and in the Hereafter they are disbelievers."

Yemen, which is already facing the worst humanitarian disaster in the world, has now recorded its first confirmed case of coronavirus. Save the Children says the country has only about 700 intensive care unit beds, including 60 for children, and only 500 ventilators for a population of 30 million. To be sure, after five years of devastating war, the country will be unable to cope if the virus spreads. The result would certainly be catastrophic.

For the Saudis however, the coronavirus pandemic was a blessing in disguise, as it gave the government the excuse to declare a unilateral ceasefire and create the condition where all parties to the conflict, including the Houthis, who developed their own peace plan, could agree on a ceasefire, without losing face. The Saudis became deeply alarmed about the potential spread of the virus in Yemen, with which it shares a 1,100-mile-long border. Millions of Yemenis live in overcrowded and unhygienic areas, which can infect hundreds of thousands in Saudi Arabia already engulfed by the virus. Seeking a peace agreement with the Houthis became the only viable option to spare Saudi lives and resources.

Now that the Kingdom decided on a ceasefire, it must stop short of nothing to permanently end the war. First, it must extend the ceasefire beyond the two weeks it has initially offered, and then negotiate with the Houthis in earnest to reach a peace accord that all parties to the conflict, including Iran (which is also eager to cut its losses), will embrace.


It is time for Saudi Arabia, the custodian of Sunni Islam, to stop making a mockery of the religion of the state, at the core of which is humanity, compassion, and caring, and uphold the moral values which are the fundamental tenets of Islam.

Related Topic(s): Children; Crimes Against Humanity; Houthis; Muslim; Yemen Destruction, Add Tags
Add to My Group(s)
Go To Commenting
The views expressed herein are the sole responsibility of the author and do not necessarily reflect those of this website or its editors.