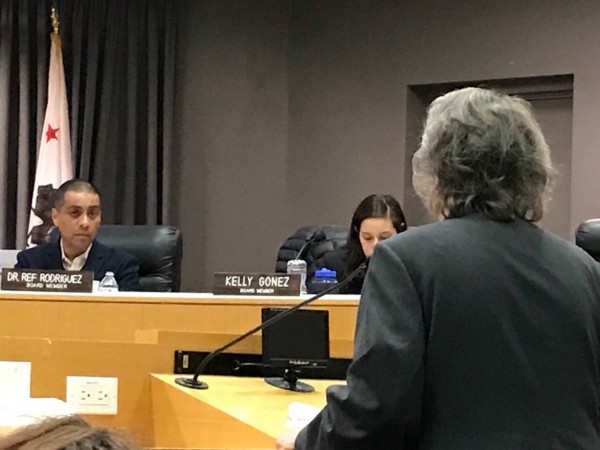 Jackie Goldberg faces the felon she seeks to succeed
(Image by Carl Petersen)   Details   DMCA
"https://youtu.be/p4amL3hCfTM">I believe there should be an election. I've been consistent for 12 years." - LAUSD Board Member Dr. Richard Vladovic

The students in the Los Angeles Unified School District's (LAUSD) Board District 5 have been unrepresented since Ref Rodriguez was forced from office on July 23, 2018. Considering the fact that the charter-school founder pleaded guilty to crimes related to his election, these constituents have not been represented fairly since the day he took office. Board member Scott Schmerelson offered a resolution that would have given them representation by appointing Jackie Goldberg to the seat until an election could be held. However, after a meeting poisoned by bigotry, the Charter-backed board members sided with Dr. Vladovic to leave one-seventh of the district's stakeholders unrepresented.

While Goldberg had promised not to run in the special election if she had been appointed at the August board meeting, the board's "no" vote meant she was free to declare her candidacy. In the primary that was held on Tuesday, the former LAUSD board member, LA City Councilperson and State Assembly member won 48.26% of the vote in preliminary results. Her closest competitor, Graciela "Grace" Ortiz, was far behind with a vote totaling 13.3%. Since no candidate took over 50% of the vote, a runoff will have to be held on May 14. The students of Board District 5 should not have to wait that long to be represented.

In order to win in May, Ortiz would have to secure the near-unanimous support of those who voted for all of the other candidates. This unlikely scenario is made even more improbable by the fact that Rocio Rivas released a statement before the election urging her supporters to vote for Goldberg. With the two opponents coming from different sides of the heavily gerrymandered district, the runoff election will bring the opportunity for real dialog and debate. The May election will decide who finishes Ref's term, but the clear choice of a plurality of the voters should give Goldberg the opportunity to start serving the stakeholders immediately.

At the first opportunity, the LAUSD board needs to reconsider the Schmerelson-backed August resolution that they rejected and which appoints Ms. Goldberg to the board temporarily until the election is held and finalized. The residents of Board District 5 have been unrepresented for long enough.

The Importance of an Interim Appointment in Board District 5 Nick Melvoin's supporters couldn't dispute Jackie Goldberg's qualifications for the LAUSD School Board, so they attacked her ethnicity.
(Image by YouTube, Channel: Carl Petersen)   Details   DMCA