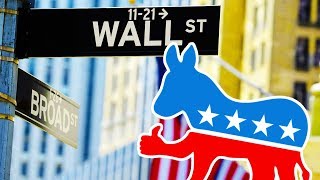 Never underestimate the capacity of the United States' Inauthentic Opposition Party, the corporate Democrats, for self-congratulatory delusion and the externalization of blame.

Look, for example, at the Democratic National Committee's (DNC) recently filed 66-page lawsuit against Russia, WikiLeaks, and the 2016 Donald Trump campaign. The document accuses Russia of "mount[ing] a brazen attack on the American democracy," "destabilize[ing] the U.S. political environment" on Trump's (and Russia's) behalf, and "interfering with our democracy..."

"The [RussiaGate] conspiracy," the DNC Complaint says, "undermined and distorted the DNC's ability to communicate the [Democratic] party's values and vision to the American electorate" and "sowed discord within the Democratic Party at a time when party unity was essential..."

Yes, Russia, like numerous other nations living under the global shadow of the American Superpower, may well have tried to have some surreptitious say in 2016 U.S. presidential election. (Why wouldn't the Kremlin have done that, given the very real and grave threats Washington and its Western NATO allies have posed for many years to post-Soviet-era Russian security and peace in Eastern Europe?)

We have, rather, a corporate and financial oligarchy, an open plutocracy. U.S.-Americans get to vote, yes, but the nation's "unelected dictatorship of money" reigns nonetheless in the United States, where, as leading liberal political scientists Benjamin Page (Northwestern) and Marin Gilens (Princeton) find, "government policy" reflects the wishes of those with money, not the wishes of the millions of ordinary citizens who turn out every two years to choose among the preapproved, money-vetted candidates for federal office."

Russia and WikiLeaks "destabilized the U.S. political environment"? Gee, how about the 20 top oligarchic U.S. mega-donors who invested more than $500 million combined in disclosed campaign contributions (we can only guess at how much "dark," that is undisclosed, money they gave) to candidates and political organizations in the 2016 election cycle? The 20 largest organizational donors also gave a total of more than $500 million. The foremost plutocratic election investers included hard right-wing billionaires like casino owner Sheldon Adelson ($83 million disclosed to Republicans and right-wing groups), hedge-fund manager Paul Singer ($26 million to Republicans and the right), hedge fund manager Robert Mercer ($26 million) and packaging mogul Richard Uihlein ($24 million).

How about the multi-billionaire Trump's own real estate fortune, which combined with the remarkable free attention the corporate media oligopoly granted him to help catapult the orange-tinted fake-populist beast past his more traditional Republican primary opponents? And what about the savagely unequal distribution of wealth and income in Barack Obama's America, so extreme in the wake of the Great Recession that Hillary's primary campaign rival Bernie Sanders could credibly report that the top tenth of the upper U.S.1% possessed nearly as much wealth as the nation's bottom 90%? Such extreme disparity helped doom establishment, Wall Street- and Goldman Sachs-embroiled candidates like Jeb Bush, Marco Rubio, and Mrs. Clinton in 2016. Russia and WikiLeaks did not create that deep, politically- and neoliberal-policy-generated socioeconomic imbalance.

And just what were the Democratic Party "values and vision" that Russia, Trump, and WikiLeaks supposedly prevented the DNC and the Clinton team from articulating in 2016? As the distinguished political scientist and money-politics expert Thomas Ferguson and his colleagues Paul Jorgensen and Jie Chen noted in an important study released three months ago, the Clinton campaign "emphasized candidate and personal issues and avoided policy discussions to a degree without precedent in any previous election for which measurements exist...it deliberately deemphasized issues in favor of concentrating on what the campaign regarded as [Donald] Trump's obvious personal weaknesses as a candidate." Strangely enough, the Twitter-addicted reality television star Trump had a lot more to say about policy than the former First Lady, U.S. Senator, and Secretary of State Hillary Clinton, a wonkish Yale Law graduate.

The Democrats "values and vision" in 2016 amounted pretty much to the accurate but hardly inspiring or mass-mobilizing notion that Donald Trump was an awful person who was unqualified for the White House. Clinton ran almost completely on candidate character and quality. This was a blunder of historic proportions, given Clinton's ownhighly problematic character brand. Any campaign needs a reasonably strong policy platform to stand on in case of candidate difficulties.

One ironic but "fateful consequence" of her curious connection to conservative business interests was her "strategic silence about most important matters of public policy. ... Misgivings of major contributors who worried that the Clinton campaign message lacked real attractions for ordinary Americans were rebuffed. The campaign," Ferguson, Jorgenson, and Chen wrote, "sought to capitalize on the angst within business by vigorously courting the doubtful and undecideds there, not in the electorate."

Paul Street (www.paulstreet.org and paulstreet99@yahoo.com) is the author of Empire and Inequality: America and the World Since 9/11 (2004), Racial Oppression in the Global Metropolis (2007), Barack Obama and the Future of American Politics (more...)
Related Topic(s): Corporate; Democracy; Democrats; Donors; Issues; Neo-liberal; Opposition Party, Add Tags
Add to My Group(s)
Go To Commenting
The views expressed herein are the sole responsibility of the author and do not necessarily reflect those of this website or its editors.