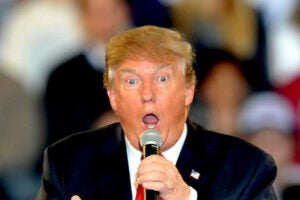 Early Saturday morning, March 4, the 45th president of the United States alleged in a series of tweets that former president Barack Obama orchestrated a "Nixon/Watergate" plot to tap Trump's phones at his Trump Tower headquarters last fall in the run-up to the election. Trump concluded that the former president is a "Bad (or sick) guy!"

Trump cited no evidence for his accusation.

Folks, we've got a huge problem on our hands. Either:

Trump is more nuts than we suspected -- a true delusional paranoid who shouldn't be anywhere near the nuclear codes that could obliterate the planet, or near anything else that could determine the fate of America or the world.

Or Trump's outburst was triggered by commentary in the "alt-right" publication, Breitbart News, on Friday, which reported an assertion made Thursday night by right-wing talk-radio host Mark Levin suggesting Obama and his administration used "police state" tactics last fall to monitor the Trump team's dealings with Russian operatives.

But if this was the case, we've got a president willing to put the prestige and power of his office behind baseless claims emanating from well-known right-wing purveyors of lies. That means Trump still shouldn't be anywhere near the nuclear codes that could obliterate the planet or anywhere else he could do damage.

The third possibility is that Trump is correct, and the Obama administration did in fact tap his phones. But if this was the case, before the tap could occur it's highly likely Trump committed a very serious crime, including treason.

No president can order a wiretap on his own. For federal agents to obtain a wiretap on Trump, or anyone else, the Justice Department would first have had to convince a federal judge that it had gathered sufficient evidence of probable cause to believe Trump had committed a serious crime or was an agent of a foreign power, depending on whether it was a criminal or foreign intelligence wiretap.

If this is the case, we've got someone in the Oval Office who's very likely to have committed treason or some other highly serious crime. In which case he still shouldn't be making decisions that could endanger America or the world.

What other explanation could there be for Trump's Saturday rant? He's been known to use tweets to divert attention from news stories he doesn't want the public and the media to focus on. Was Trump seeking to divert public attention from the Jeff Sessions imbroglio and the increasing number of Trump associates found to have been in contact with Russian agents before and after the election?

That seems unlikely because Trump's trumped-up charge of wiretapping isn't really a distraction at all. If you accept Trump's version of events, why would the Obama administration have been collecting information on Trump if not because of Trump's purported Russian connections? Trump's accusation thereby focuses even more attention on the possibility he conspired with the Russians to win the election.

Or is Trump trying to build a case that the entire Russian story is a plot concocted by the Obama Administration, along with the CIA, FBI, and National Security Agency, and the mainstream press, to bring Trump down?

So there you have it. Whatever the reason for Trump's rant, America is in deep trouble. We have a president who is either a dangerous paranoid, or is making judgments based on right-wing crackpots, or has in all likelihood committed treason.

Each of these possibilities is as worrying as the other.

Related Topic(s): Rant; Trump Insults; Tweet, Add Tags
Add to My Group(s)
Go To Commenting
The views expressed herein are the sole responsibility of the author and do not necessarily reflect those of this website or its editors.