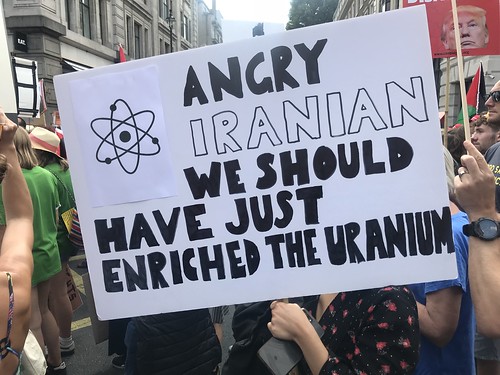 In July 2015, the United States and Iran, (along with Great Britain, France, Russia, China, and Germany), reached an agreement on limiting Iran's nuclear program -- known as the Joint Comprehensive Plan of Action (JCPOA). President Barack Obama said it would extend the time it would take for Iran to make enough weapons-grade uranium for a single nuclear bomb. It would accomplish this by limiting the size of Iran's uranium stockpile, reducing the number of isotope-separation centrifuges, and reducing the level of uranium enrichment. It also contained provisions for unannounced inspections of Iran's nuclear development program. Should Iran not comply, the United Nations could reimpose previous sanctions.

For the United States and the other five nations, the aim was denuclearization. For Iran, it was ending U.S. and international economic sanctions.

In May 2018, fifteen months into his presidency, Donald Trump officially withdrew the United States from the JCPOA and signed a Presidential Memorandum ordering the reinstatement of harsher sanctions.

In July 2019, Iran responded by stating that it had begun to increase uranium enrichment beyond the agreed limit of the JCPOA -- the material needed to make a nuclear bomb.

Newly elected Democratic President Joe Biden wants to return to the table for talks with Iran and the other five nations, and have the United States rejoin the JCPOA.

On Saturday, June 19, 2021, Ebrahim Raisi was declared the winner and President-elect of Iran and called on the United States to return to the nuclear deal in a timely manner.

The next day, on Sunday, June 20, 2021, foreign diplomats -- in previous ongoing talks in Vienna -- said that further progress had been made between Iran and global powers to try to restore the landmark 2015 agreement.

The U.S. did not have a representative at the table in Vienna. However, President Joe Biden's administration has signaled a willingness to rejoin the Iran deal under terms that would broadly see the United States scale back sanctions and Iran return to its 2015 nuclear commitments. A U.S. delegation in Vienna is taking part in indirect talks with Iran, with diplomats from the other world powers acting as go-betweens.

The election of Ebrahim Raisi as Iran's next president has the potential to be a positive turning point for Iran.

"My serious proposal to the United States government is for them to return [to the agreement] in an expedited manner ... in doing so they will prove their sincerity," Raisi said. "The people of Iran do not have good memories of the JCPOA."

"The Americans trampled on the JCPOA and the Europeans failed to live up to their commitment. I reiterate to the U.S. that if you are committed to lifting the sanctions -- come back and live up to your commitments."

Iran has one operating nuclear power plant, the Bushehr Nuclear Power Plant, located 11 miles southeast of the city of Bushehr, along the Persian Gulf. It began producing power for the electrical grid in March 2011. Its operation has prevented the release of 37.7 million tons of pollutant or greenhouse gases into the environment. Other nuclear power plants in Iran are currently under construction.

With Joe Biden in the White House, and President-elect Ebrahim Raisi in Iran, a new agreement could be reached soon for the United States to rejoin the 2015 JCPOA, lift economic sanctions on Iran, and for Iran to reduce their level of uranium enrichment back to the agreed limit of the original 2015 JCPOA.

Jack Lindauer has written for the Los Angeles Daily Journal newspaper. He is a Los Angeles based filmmaker. He writes on foreign policy issues. He studied Political Science at Harvard University, with a concentration in U.S. Public Policy.

Related Topic(s): Iran Nuclear Deal; Iran Nuclear Talks; US-Iran Talks, Add Tags
Add to My Group(s)
Go To Commenting
The views expressed herein are the sole responsibility of the author and do not necessarily reflect those of this website or its editors.

The Real Reason Why China May Want Reunification With Taiwan

Why Russia Invaded Afghanistan 42 Years Ago

Why Mass Shootings May Never End