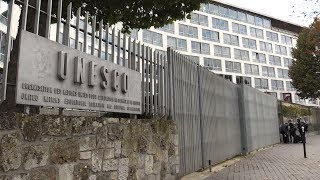 The United States has decided to no longer participate in the United Nations 47-member Human Rights Council (UNHRC). The number one reason cited by U.S. Ambassador Nikki Haley was that the council is unfairly critically focused on Israel. The United States had already left the U.N.'s cultural organization UNESCO last October, the last straw reportedly being when the organization named the city of Hebron on the West Bank a Palestinian World Heritage site, which Israel declared to be unacceptable. At that time, the number one reason cited by Haley for the withdrawal was that the organization was too critical of Israel. 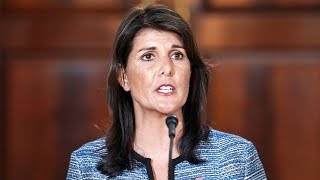 The Trump administration is withdrawing from the UN Human Rights Council because of what U.S. Ambassador Nikki Haley described as its 'hypocrisy' and bias
(Image by YouTube, Channel: CBC News)   Details   DMCA

Haley has also made a number of other comments relating to the United Nations and Israel. Immediately upon taking office she complained that "nowhere has the U.N.'s failure been more consistent and more outrageous than in its bias against our close ally Israel," and vowed that the "days of Israel bashing are over."

There is clearly a disinclination on the part of the Trump Administration to support multinational bodies, evident in the rejection of climate, trade and non-proliferation agreements. Complete withdrawal from the United Nations is not unthinkable in the current climate, though the Democrats and some moderate Republicans would no doubt strongly resist such a move. In my opinion, the United Nations is a dystopian mess but it is better to have it than not as it provides a forum where nations that otherwise cannot meet are able to do so and discuss transnational issues. And it should be conceded that the U.N.'s inability to actually function is largely both structural and bureaucratic due to the veto power given to the Security Council's five permanent members, a function that Nikki Haley has repeatedly used to stop resolutions that might be offensive to the United States or Israel.

Beyond that, Haley's constant citation of concern for Israel gives strength to the suggestion that there is something unnatural about its bilateral "special" relationship with the United States. In the Middle East in particular, Israel would seem to be driving U.S. policy, particularly vis-a-vis Syria, Lebanon and Iran. Israel is intent on continuing political chaos in Syria lest there be a threat to its continued occupation of the Golan Heights and has warned about possible preemptive action in Lebanon to punish Hezbollah. It also wants the United States to deal decisively with Iran. By all accounts, those agendas are proceeding very well as Washington has been regularly threatening Iran and last week vowed to take military action if Damascus seeks to recover territory in the Syrian southwest that until recently was held by terrorists.

It is difficult to discern what the joint United States-Israeli strategy might be towards the United Nations and other international bodies. Neither has recognized the authority of the International Criminal Court in The Hague for fear that its own senior officials might be arrested and tried for war crimes. To be sure, both countries are protected against any serious challenges in the U.N. itself by the American veto power over the Security Council, which alone has the authority to mandate sanctions or peacekeeping operations.

But the U.S. withdrawal from U.N. agencies is, if anything, a sign of weakness rather than strength. If Washington were indeed confident in its own brand of international leadership it would welcome the opportunity to sit on panels and help shape the views of other countries with which it has a politically neutral or adversarial relationships. That it does not choose to do so suggests that there is an understanding that what Washington is selling no one is buying.

The complete isolation of the United States at the United Nations and also elsewhere, to include G-7, was exhibited recently during June 1st votes at the U.N. Security Council. A resolution sponsored by Kuwait seeking an inquiry into the Israeli killing of unarmed demonstrators in Gaza and a motion by Haley seeking to blame Hamas for the deaths both were voted on. Haley's was the only vote against the former and the only vote in favor of the latter. She predictably commented afterwards that "Further proof was not needed, but it is now completely clear that the U.N. is hopelessly biased against Israel."

Related Topic(s): Israel; Palestinian; UNESCO; United Nations; United States Corruption; Withdrawal; World Issues, Add Tags
Add to My Group(s)
Go To Commenting
The views expressed herein are the sole responsibility of the author and do not necessarily reflect those of this website or its editors.