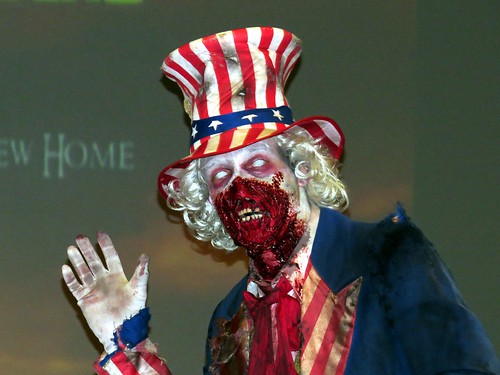 The United States government has never allowed independent governments in Latin America. Every time people elect a government that represents them instead of US economic interests, Washington overthrows the elected government. Marine General Smedley Butler told us this, as have many others. There is no doubt about it.

Currently Washington is trying to overthrow the governments of Venezuela and Nicaragua and has bought off the Ecuadorian government with oil purchases and the usual personal bribes. Evo Morales' government in Bolivia is also targeted by Washington. The Obama regime succeeded in removing the reform governments in Honduras, Argentina, and Brazil.

Reform governments in Latin America, except for Castro's Cuba, always leave themselves set-up to be overthrown. They foolishly or impotently permit Washington's agents, such as the National Endowment for Democracy, the US Agency for International Development, and various so-called NGOs, whose purpose is to maintain Washington's control and overthrow every government that escapes control, to organize and fund opposition groups and media that work hand-in-hand with Washington to reinstall a Washington-compliant government.

As Marx, Lenin, Mao, and Pol Pot understood, you cannot overthrow an oppressor class if you leave them unmolested. Whether from weakness or stupidity, Latin American reform governments always leave the electorally defeated oppressor class and its economic and media power unmolested. When Washington reinstalls the oppressor class, the same tolerance is never shown to the overthrown reformers who usually pay with their lives.

All Latin American reform efforts have made the foolish mistake of leaving the oppressor class with their newspapers and their traitorous connections to Washington in place, including the government of President Ortega in Nicaragua. One would think that Ortega would know better. Washington has been trying to get rid of Ortega and the Sandinistas since the Reagan administration. His government has survived the latest Washington-led coup attempt, but Washington is pouring more money into the effort. Read Kevin Zeese's report here.

Hugo Chavez made the same mistake in Venezuela, and his successor has repeated the mistake. The post-Castro Cuban government is now also falling into the trap of becoming an American vassal as it was under Fulgencio Batista.

The Monroe Doctrine has always been glorified in US textbooks as warning European colonialists away from Latin America. The Americans intended it for themselves and succeeded in keeping Latin America as a colony. The Organization of American States has always been in Washington's pocket and remains there today. Latin America accepts its colonized existence and does not come to the aid of those democratic governments that Washington targets for overthrow. Latin America is impotent, because its leaders are paid off, blackmailed, or threatened by Washington.

Washington has pretended forever to be the great friend and protector of democracy, but every time an independent government comes into existence in Latin America, Washington overthrows it.

In 2015 President Barack Obama, America's first Black President and "great friend of the oppressed," citing "the unusual and extraordinary threat to the national security and foreign policy of the United States posed by Venezuela," signed an executive order and imposed sanctions. Obama's excuse was the Washington-incited violence that led to the arrest of some of those committing acts of violence. Washington quickly termed the criminals Washington had incited "political prisoners" and called for "dialogue" instead of "silencing critics with arrests." Washington declared the arrests of those committing acts of violence to be "human rights violations by the Venezuelan government."

The presstitutes reported this with a straight face.

A government that has no shame whatsoever in telling the most transparent lies while actively trying to overthrow a democratically elected government is a government that deserves universal condemnation. Yet the world is too well paid off or scared to open its mouth.

Related Topic(s): Abuse Of Power; Powers That Be; United Nations; United States Fascism, Add Tags
Add to My Group(s)
Go To Commenting
The views expressed herein are the sole responsibility of the author and do not necessarily reflect those of this website or its editors.