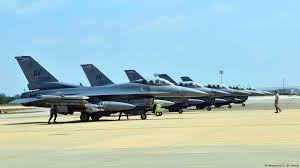 Current events concerning Turkey and the Kurds in Syria remind me of a conversation I had with a US Air Force colonel almost 17 years ago in a courtroom in Des Moines. To refresh my memory, I dug deep into my closet and dusted off the transcript of the case, "STATE OF IOWA, plaintiff vs. CHRISTINE GAUNT et al.," in which I was a defendant, heard in February, 2003, the month before the US invasion of Iraq. The following quotes from that dialogue are verbatim per the transcript.

The case concerned an alleged trespass at the headquarters of the 132nd Tactical Fighter Wing of the Iowa Air National Guard, based at Des Moines International civilian airport, on October 26, 2002. Activists from around Iowa blocked the gates of the base in protest of the 132nd's participation in Operation Northern Watch, the no-fly zone over northern Iraq imposed by the US after the Gulf War that lasted until the Iraq War in 2003. Pilots and crews of the Guard's F-16 fleet went to Turkey to participate in patrolling northern Iraq or to Kuwait to patrol in Operation Southern Watch for a month during most of the years those no-fly zones were in place.

Under direct questioning by the prosecutor, Col. Pierce described how the 132nd was under federal control as part of the US Air Force while posted overseas and how the no-fly zones were authorized and conducted under a United Nations resolution. The resolution that Col. Pierce cited did not exist. Secretary General of the UN, Boutros Boutros-Ghali insisted that the no-fly zones were "illegal," but US government and the Air Force often used this fiction to justify their almost daily incursions into Iraqi airspace that often resulted in civilian casualties.

Another fiction that Col. Pierce swore to under oath is the purpose of the no-fly zone. Defending myself, I had the opportunity to cross-examine the Colonel, "Do you have any knowledge of what the purpose of that no-fly zone -- the northern watch is?" Predictably, Colonel Pierce testified according to the official narrative: "Primary Purpose is, obviously, to reinforce the no-fly zone in northern Iraq and primarily to keep Saddam Hussein from attacking the Kurds who live in northern Iraq in which he had done on numerous occasions prior to the establishment of those no-fly zones."

The base of operations for the US Air Force patrols over Iraq was Incirlik Air Base, the colonel affirmed. "So this Incirlik Air Base is ...whose air base is it?" I asked. "Is it the United States air base?" "No. It belongs to Turkey," he answered. "There are Turkish forces there too?" "Yes sir."

"Have US Air Force enforcement of no-fly zones ever been interrupted so that the Turkish Air Force can go into Iraq and bomb Kurdish cities there?" I asked. "I don't have personal knowledge of that," Col. Pierce replied, followed by an eloquent and perfect example of Orwellian doublespeak: "All I can tell you is that our activities in northern Iraq have been restricted when supposedly events like that took place. And the reason our activities were restricted is that they didn't want to have any black eye, if you will, on the United States or UN forces that they could accuse us of doing that if that's what they did."

What the colonel told the court is that he did not know about the Turkish Air Force bombing Kurds in the very zone he swore that the US Air Force was there to protect, but he testified that when, not if, but when, "supposedly events like that took place," US Air Force activities in the zone were restricted. And the reason for that restriction was "they (the US and UN) didn't want to have any black eye" for anything that the Turkish forces did to the Kurds.

"So if I got this right," I asked just to be sure, "the watch is primarily to protect the Kurds. However, the watch is lowered when Turkey wishes to attack the Kurds, is that correct?" Col. Pierce had no answer, but taking a cue from the Nuremberg trials he demurred: "You are asking me to make foreign policy decisions, and that's well above my pay grade." Rather than allow proceedings to edge any nearer to the truth, the prosecutor intervened, "Objection, Your Honor" and the judge complied, "Okay, I'll sustain that objection."

Brian lives on a Catholic Worker Farm in Maloy, Iowa, and is a co-coordinator for Voices for Creative Nonviolence.
Related Topic(s): Incirlik Air Base; Iraq; Syria; Trump; United Nations; United States Air Force; Wars, Add Tags
Add to My Group(s)
Go To Commenting
The views expressed herein are the sole responsibility of the author and do not necessarily reflect those of this website or its editors.