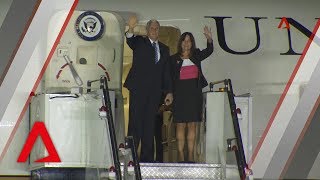 It shouldn't come as a surprise a reporter traveling with Vice President Mike Pence to Singapore interpreted the words of the VP as the US initiating a Cold War with China.

Pence was quoted as saying, "I think much of that will depend on Argentina"-with Trump meeting China's President Xi Jinping on the sidelines of the G20 summit in Buenos Aires, Argentina November 30. "The presidents attitude is, we want to make sure they know where we stand, what we are prepared to do, so they can come to Argentina with concrete proposals that address not just the trade deficit we face...We're convinced China knows where we stand," that the US is "in strong position" to escalate its trade war with China and the US has no intention to cede its influence in Asia, that if China doesn't back down and continues its current policies, "then so be it, we are here to stay". [1]

Meanwhile Trump's National Security Adviser John Bolton attending the ASEAN, "Association of Southeast Asian Nations" meeting in Singapore warned the US will up its naval presence in the South China Sea with its "freedom of navigation" ploy-which China clearly sees as a provocation as she has not interfered with any shipping traversing those waters.

Let's face it. China has become the world's 2nd largest economy and has launched its $trillion dollar Belt and Road Initiative-BRI-essentially a massive economic and infrastructure development project of high speed rail from China to Lisbon, Portugal that doesn't include the US-which means it's a challenge to US hegemony ; something the US will not tolerate, clearly putting China clearly in US crosshairs initiating a trade war and ramping up its military provocations in the South China Sea.

China is no longer some 3rd world backwater. It isn't about to roll over and submit to US bullying from its policies and actions.

It has allied itself closely with Russia both economically and militarily deepening its ties as both countries have had to endure US military provocations, economic sanctions, a trade war as well as accusations of interfering in US elections-which included China in the recent Congressional elections.

It's become obvious to any serious observer since the end of WWII the US will not tolerate any country taking an independent course rejecting US hegemony over it. The US will resort to any measure, engage in any means necessary to keep that from happening. Thus overthrow legitimately elected presidents and prime ministers whether by a coup or assassination, color revolution, infiltrate and co-opt legitimate protests with agent-provocateurs inducing violence to get official government over-reaction. But if that fails as happened with Cuba then induce an embargo and demonize its leader as a Communist dictator. The same with Venezuela, Nicaragua-not to mention initiating false flag attacks to escalate an unnecessary war in Vietnam or more recently the illegal invasions of Afghanistan and Iraq or sending its military uninvited into Syria, plus training and arming mercenary al Qaeda jihadists to attempt regime change.

Yet the majority of Americans have been so propagandized and indoctrinated they support its government's interfering into the affairs of any other country as the leaders are always demonized, portrayed as "enemies" thus a threat to America. It's pure hokum of course but seemingly accepted by most of the people.

Maybe it's because Americans allowing themselves to consciously reflect on what "official" Washington has done in their name would be too disturbing, too much for most to bear, cause such cognitive dissonance it would turn their world upside down threatening core beliefs they've automatically accepted since their first day reciting the "Pledge of Allegiance".

Or maybe really thinking would just upset a comfortable lifestyle...so just ignore it all.

But provocations, policies and actions directed against China or Russia could lead to a hot war against the two other nuclear weapons superpowers.

That would be pure insanity.

Retired. The author of "DECEIT AND EXCESS IN AMERICA, HOW THE MONEYED INTERESTS HAVE STOLEN AMERICA AND HOW WE CAN GET IT BACK", Authorhouse, 2009
Related Topic(s): Bullying; Cold War; Hegemony; Provocation; Sanctions; Tariffs; Trade, Add Tags
Add to My Group(s)
Go To Commenting
The views expressed herein are the sole responsibility of the author and do not necessarily reflect those of this website or its editors.