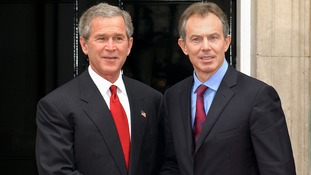 Copyrighted Image? DMCA
the UK parliament released its long-awaited Chilcot report on the country's role in the Iraq war on Wednesday, there have been renewed calls all over Britain to try former prime minister Tony Blair for war crimes. This brings up another question: what about George W Bush?

The former US president most responsible for the foreign policy catastrophe has led a peaceful existence since he left office. Not only has he avoided any post-administration inquiries into his conduct, he has inexplicably seen his approval ratings rise (despite the carnage left in his wake only getting worse). He is an in-demand fundraiser for Republicans not named Donald Trump, and he gets paid hundreds of thousands of dollars to speak at corporate events. The chances of him ever saying in public, "I express more sorrow, regret and apology than you can ever believe," as Blair did on Wednesday, are virtually non-existent.

The only thing close to the Chilcot report in the US was the Senate intelligence committee's long-delayed investigation on intelligence failures in the lead-up to Iraq, released in 2008. The Democratic-led committee faulted the CIA for massive intelligence failures and the Bush administration for purposefully manipulating intelligence for public consumption. It led to a couple days of headlines, denunciations from the Bush White House (still in office at the time) and that was it.

After that, the Senate intelligence committee continued to lavish the CIA with praise, increase its budgets and provide only a modicum of oversight, despite the many scandals that preceded and succeeded the report. When the same intelligence committee later investigated illegal CIA torture -- also directed by the highest levels of the Bush administration -- they didn't even bother mentioning the top officials who designed and sanctioned the program, only the anonymous (read: redacted) underlings who carried it out.

Bush himself suffered no consequences and, by that time, was claiming that the "Iraq surge had worked," a misleading drumbeat meant to obscure his calamitous original decision. Barack Obama took prosecuting Bush officials for anything related its "war on terror" off the table before his administration ever took office, and his administration's stance on torture turned a blatant war crime into a policy dispute. And that was that.

Related Topic(s): Chilcott Inquiry; Crime; President George Bush; Tony Blair, Add Tags
Add to My Group(s)
Go To Commenting
The views expressed herein are the sole responsibility of the author and do not necessarily reflect those of this website or its editors.