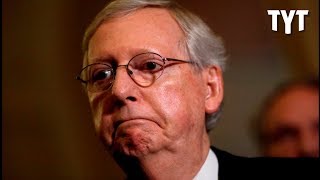 Republican Senate Majority Leader Mitch McConnell announced Friday afternoon that he had the necessary 50 votes to pass the tax cut for the wealthy and giant corporations through the Senate. Voting on a series of amendments by Democrats, nearly all rejected on 52-48 party-line votes, culminated in final passage of the measure early Saturday morning by a 51-49 margin.

The undemocratic process by which the tax cut bill has been pushed through the House and Senate testifies to its reactionary and socially criminal character. There have been no public hearings, no witness testimony, no submissions from economists or tax experts about the impact of the massive changes proposed in the federal tax code.

As late as 4:15 p.m. Friday, as debate continued on amendments to the bill, the actual text of the legislation was not available to senators preparing to vote on it, let alone the American people. Handwritten pages were being pasted into the bill after they had been reviewed and approved by corporate lobbyists. Entire chapters accounting for hundreds of billions of dollars in revenue were being rewritten behind closed doors to satisfy the demands of the last few Republican holdouts.

For Senator Lisa Murkowski of Alaska, who voted against Obamacare repeal, the price of her vote was incorporating into the tax bill an unrelated provision opening the Alaska National Wildlife Refuge for oil and gas exploration. For Ron Johnson of Wisconsin and Steve Daines of Montana, the price was another $60 billion in tax breaks for "S-corporations," the mid-sized, multi-million-dollar enterprises that were treated less advantageously in the original bill than giant corporations. The families of both senators own such companies. Senator Susan Collins of Maine extracted a promise from Trump to support increased financial subsidies for big insurance companies participating in Obamacare.

Democratic senators made demagogic statements during the floor debate, denouncing the legislation as a handout to the wealthy and big business. The pretense of concern for the impact on working people is completely bogus, but the outrage on the part of the Democrats is real: they are angry that they have been cut out of the lucrative deal-making. The White House and the Senate Republican leadership decided to push the tax cut through under a procedure known as "reconciliation," which requires only 50 votes and avoids the threat of a filibuster, depriving the Democrats of any input on the legislation. All previous tax cut bills have been bipartisan affairs, in which the two capitalist parties worked together to deliver the goods to their favored corporate interests.

The Democrats are not seeking to rally popular opposition to a brazen tax giveaway to the super-rich. Rather, they are appealing to the Republicans to let them participate in the grubby legislative horse-trading. At least 15 Democrats appeared at a press conference Tuesday to send a message to the Republican majority: "Why settle for just 50 votes on tax reform when you could get as many as 70?" Senator Joe Manchin of West Virginia, one of the group, said. "If you've heard the rhetoric that Democrats don't want tax reform, that's false. We want tax reform. The country needs meaningful tax reform."

Senate Democratic Leader Charles Schumer was not in the group, but he has repeatedly indicated his support for the main goals of the tax bill, which are to slash the corporate income tax rate, now 35 percent, and to allow giant companies holding trillions in cash overseas to "repatriate" the funds and pay only a nominal tax. He closed out the Senate debate with unctuous praise for Republicans, "many of whom I admire," and an appeal for them to reconsider and reach a bipartisan deal with the Democrats.

The White House and the congressional Republicans are seeking to conceal the brazen class character of the tax bill with an unprecedented barrage of lies. Trump appeared at a campaign-style rally in Missouri where he claimed that the tax bill would hurt billionaires like himself, while helping people of more humble means: "Our focus is on helping the folks who work in the mailrooms and machine shops of America, the plumbers and the carpenters, the cops and the teachers, the truck drivers and the pipe fitters."

Both the New York Times and the Washington Post published analyses Friday of the impact of the tax cuts on Trump, based on his 2005 tax return, the only one available, showing that under the Trump-backed bill the billionaire president would save $31 million of the $38 million he paid in taxes that year, as well as (in the House version) escaping an estimated $1.1 billion in estate taxes.

The class character of the tax cut legislation must be understood historically. During the heyday of American capitalism, when the ruling elite could afford to extend modest concessions to working people, the income tax rate on the wealthiest families rose as high as 90 percent. Even if this rate could be evaded through tax avoidance schemes, it set a marker that those with the highest incomes were expected to pay significant amounts to underwrite federal social spending.

Over the past 40 years, as a central part of the social counter-revolution waged by the US ruling elite, under both Democratic and Republican administrations, the top income tax rate has dropped sharply: from 90 percent to 70 percent in the 1970s, then from 70 percent to 28 percent under Reagan in the 1980s.

Huge tax cuts for the wealthy combined with a savage attack on working class wages to drive up economic inequality to staggering levels. Today, three American billionaires own more wealth than the bottom half of the population. Real wages have stagnated or declined since 1972.

The current tax bill marks a certain culmination in this process. American capitalism is in deepening crisis. The soaring stock market is not a sign of health, but the fever chart of a system on the brink of collapse. There is a genuine element of desperation in the frenzy in Washington to engineer one more transfusion of financial resources taken from working people and pumped into the sclerotic veins of the Wall Street addicts.

The money-grabbing is so reckless that the tax bill does not provide even a fig leaf of "fairness." In 2027, for example, according to figures provided by the Joint Committee on Taxation and the Congressional Budget Office (both Republican-controlled), the bill raises the taxes of people making $40,000 to $50,000 a year by $5.3 billion and cuts the taxes of those making $1 million a year or more by $5.8 billion.

Patrick Martin writes for the World Socialist Website (wsws.org), a forum for socialist ideas & analysis & published by the International Committee of the Fourth International (ICFI).
Related Topic(s): Financial Giants; Gop Tax Bill; Oligarchy; Republican; Senate, Add Tags
Add to My Group(s)
Go To Commenting
The views expressed herein are the sole responsibility of the author and do not necessarily reflect those of this website or its editors.