Click Here to Remove All Ads
Cross-posted from The Guardian
The issue is not what separates Romney and Obama, but how much they agree. This hidden consensus has to be exposed 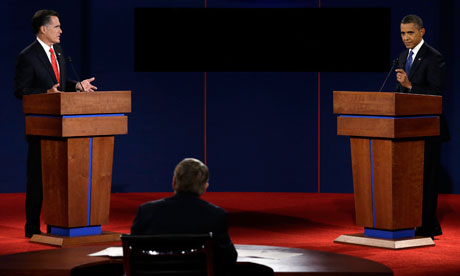 Wednesday night's debate between Barack Obama and Mitt Romney underscored a core truth about America's presidential election season: the vast majority of the most consequential policy questions are completely excluded from the process. This fact is squarely at odds with a primary claim made about the two parties -- that they represent radically different political philosophies -- and illustrates how narrow the range of acceptable mainstream political debate is in the country.

In part this is because presidential elections are now conducted almost entirely like a tawdry TV reality show. Personality quirks and trivialities about the candidates dominate coverage, and voter choices, leaving little room for substantive debates.

But in larger part, this exclusion is due to the fact that, despite frequent complaints that America is plagued by a lack of bipartisanship, the two major party candidates are in full-scale agreement on many of the nation's most pressing political issues. As a result these are virtually ignored, drowned out by a handful of disputes that the parties relentlessly exploit to galvanise their support base and heighten fear of the other side.

Most of what matters in American political life is nowhere to be found in its national election debates. Penal policies vividly illustrate this point. America imprisons more of its citizens than any other nation on earth by far, including countries with far greater populations. As the New York Times reported in April 2008: "The United States has less than 5% of the world's population. But it has almost a quarter of the world's prisoners."

Professor Glenn Loury of Brown University has observed that these policies have turned the US into "a nation of jailers" whose "prison system has grown into a leviathan unmatched in human history." The New Yorker's Adam Gopnik called this mass incarceration "perhaps the fundamental fact [of American society], as slavery was the fundamental fact of 1850."