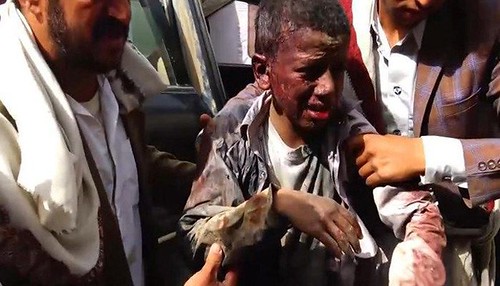 The US dominated United Nations adds a fig leaf of legality to the blockade, and a one-sided weapons embargo against Yemen. To ask why there is no UN arms embargo against Saudi Arabia is, of course, a rhetorical question.

The UN wrings its hands about a humanitarian crisis, and the worst cholera epidemic in human history. The UN does nothing to stop the US-led Saudi genocide and destruction of Yemen, and it puts out knowingly phony underreported numbers of the civilian deaths. The UN is not an honest broker.

The former US ambassador to the United Nations Nikki Haley threw a temper tantrum when the UN dared to even voice mild criticism against the US, when it moved its embassy to Jerusalem. She spoke of the UN "disrespecting" the US, and she threatened financial retaliation against the UN and countries that voted contrary to US wishes.

President Donald Trump cut funding to humanitarian UN agencies, did not try to stop Israel from gunning down thousands of unarmed Palestinians, withdrew the US from the UN Human Rights Council, and thumbed his nose at the UN International Court of Justice. Trump's national security adviser John Bolton said that the US plans on withdrawing from more treaties that are the foundation of international law.

In other words, Bolton is confirming that the US is a rouge state; it makes a mockery of the United Nations. From the beginning of the Bush-era War on Terror, the US showed contempt for the Geneva Conventions. Obama too violated customary international law with impunity. Obama assassinated US citizens, droned Afghan wedding parties and funerals, and destroyed Libya. He invaded Syria in an illegal war of aggression. Obama was really good at killing. He allegedly said so himself.

The US contaminated Bosnia, Afghanistan, and the Middle East with so-called depleted uranium. Depleted uranium can cause cancer, birth defects, and as yet other unknown health effects. The US knows it. It has put out a health warning to US Iraq war veterans.

In 1995, Madeleine Albright was interview by Lesley Stahl on the TV show "60 Minutes". That interview should live in infamy in a hall of shame for eternity. Stahl asked Albright if the death of over 500,000 Iraqi children caused by US sanctions was "worth it". Albright's answer was, "I think this is a very hard choice, but the price--we think the price is worth it." (Whoever the "we" is, Albright did not elaborate.) It is now known that "we" purposely used biological warfare to kill those 500,000 Iraqi children.

How many more children did Albright, the Bill Clinton administration and "we" continue to kill because "we" thought it was "worth it"? Hundreds of thousands, according to a study of the partially declassified Defense Intelligence Agency document "IRAQ WATER TREATMMENT VULNERABILITIES" [emphasis in original]. The partially declassified document was discovered in 1998 on an official website of the Military Health System. In 2001 the Association of Genocide Scholars released the study referred to above: The Role of "Iraq Water Treatment Vulnerabilities" in Halting One Genocide and Preventing Others.

During the 1991 First Gulf War the US purposely targeted all of the water purification plants and sanitation works in Iraq, which is itself a war crime. The "Iraq Water Treatment Vulnerabilities" document produced by the US Department of Defense and implemented in1991, was continued under President Bill Clinton. Even after Albright's admission on "60 Minutes" that the US sanctions regime had killed 500,000 Iraqi children, "we" continued the draconian embargo of water purification equipment.

Related Topic(s): Bush; Cholera; Iraq; Obama; Sanctions; Starvation; Syria; Yemen Destruction, Add Tags
Add to My Group(s)
Go To Commenting
The views expressed herein are the sole responsibility of the author and do not necessarily reflect those of this website or its editors.