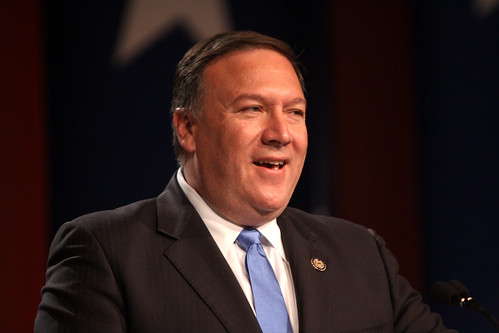 The ignorant warmonger masquerading as an American Secretary of State should be arrested for his impersonation of an American government official. Mike Pompeo cannot possibly be the US Secretary of State, because not even Donald Trump would appoint an idiot to this high position who thinks that Article 2 of the Constitution gives the president the authority to declare war and invade other countries.

Here is what the moronic imposter Pompeo said: "The president has his full range of Article 2 authorities and I'm very confident that any action we took in Venezuela would be lawful." This was Pompeo's answer when asked if President Trump could intervene in the country's power struggle without congressional approval. Of course, it is not "the country's power struggle." It is Washington's effort to overthrow the Bolivarian Revolution and regain control over Venezuela's resources.

Pompeo is twice idiot. The US Constitution gives the power to declare war only to Congress. Moreover, under the Nuremburg laws laid down by the US government after World War 2, it is a war crime to commit aggression, which is what US military intervention in Venezuela would be.

I should have said that Pompeo is three times idiot, because he asserts that countries that are diplomatically defending the democratically elected government of Venezuela are "interfering with the Venezuelan people's right to restore their own democracy." Someone should tell the idiot Pompeo that it is the Venezuelan people and the Venezuelan military that have refused Washington's financial bribes and threats, who are supporting Venezuelan democracy, not Washington whose failed coup might be followed up with another Washington war crime invasion.

Lavrov and Putin have found it difficult in the past to put down a hard foot in order to deter more illegal war crime aggression from Washington. Lavrov is too civilized of a person to have to confront a neo-Nazi like Pompeo.

Putin should send Shoigu to deal with Pompeo. The time for polite, accommodating talk is long past. A country and its people are at stake.

Let's hope Russia and China do not permit another Libya.

Someone needs to inform RT about the US Constitution. RT incorrectly reported that: "Article 2 of the US Constitution grants the president the right to declare war and act as commander in chief of the country's armed forces." Utter nonsense!

Related Topic(s): Crime; Invasion; Military; President; Secretary Of State Mike Pompeo; Warmongers, Add Tags
Add to My Group(s)
Go To Commenting
The views expressed herein are the sole responsibility of the author and do not necessarily reflect those of this website or its editors.